Whether you’ll be travelling or staying close to home, your summer will be better with the company of a good book.  The following are some recommendations from the Library staff, as well as what we look forward to reading this summer. 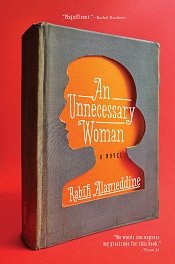 To her family and the rest of the outside world, Aaliya Saleh, a Beiruti woman in her 70s, is unnecessary. She divorced her husband at 20 and has no children. She spends her days alone, devoted to the books she translates into Arabic. She has finished 37 translations and stored them away, allowing no one else to read them. She translates these books to be able to spend more time with their words and ideas. She is difficult, opinionated, funny, and misanthropic. Aaliya is the beguiling narrator of An Unnecessary Woman by Rabih Alameddine. The novel is a fractured collection of her musings on her life, Beirut, aging, and the writers she loves (mostly outcasts and oddballs) and hates. Cloistered by choice, Aaliya is still thoroughly engaged with the world through her books. Alameddine’s novel is a particular pleasure for avid readers, and well-worth picking up this summer. Best of all, Aaliya might lead you to the next writer you’ll love – for me, it was Bruno Schulz. —Patrick Rayner, Acquisitions Assistant/Circulation Assistant

Eight World Cups: My Journey through the Beauty and Dark Side of Soccer | George Vecsey

As Brazil gets set to host the 2014 World Cup, I am very much looking forward to reading veteran New York Times columnist George Vecsey’s Eight World Cups: My Journey through the Beauty and Dark Side of Soccer. Vecsey’s account of his many years covering the world’s most-watched sports tournament should satisfy both my love of travel narratives as well as my passion for the beautiful game. To get in the spirit for this year’s World Cup, I also recommend Futebol: The Brazilian Way of Life by Alex Bellos, and, if you’re a sucker for the underdog, The Miracle of Castel di Sangro, by Joe McGinniss. —Carolyn Waters, Assistant Head Librarian

The only reason to read Palace of Ice in the summer is because its vivid descriptions of ice and snow have such a cooling effect – otherwise, this is a beautifully written book to read anytime of the year. Celebrated Scandinavian author Tarjei Vesaas’s understated tone creeps slowly along the length of this short novel like goose bumps up your spine. Two eleven-year-old girls meet on their school playground and form an instant, almost supernatural bond with one another. Suddenly one of the girls goes missing. Villagers launch a relentless search for her that lasts the length of a frosty winter, and her dearest friend holds out hope that she will reappear once the ice begins to melt.—Katie Fricas, Events Assistant/Circulation Assistant

The impending “Madeline in New York: The Art of Ludwig Bemelmans” exhibition at the New-York Historical Society inspired my sampling of the delectables within Hotel Bemelmans. The book is a compendium of the author-illustrator-bon vivants’s “funny and true (or very near true)” vignettes of life, love, and labor at the Hotel Splendide, a most thinly disguised stand-in for the city’s premiere resort of the 1920s and 30s: the Ritz-Carlton. Though a few high society eccentrics and inspired culinary creations warrant ink, most intrigue is derived from within the echelons of the hotel service staff, a diverse and multilingual array of daydreamers, con artists, and secret passageway and back-kitchen dwellers. Some, like Bemelmans himself, have risen in the ranks, through displays of pride, panache, and politesse in the face of petty demands, petty delights, and even petty thievery. Their stories, all ornamented by the author’s indelible caricature sketches, are as visceral and enchanting as a trip to his eponymous mural-adorned bar at the Hotel Carlyle. —Brynn White, Bibliographic and Systems/Digital Projects Assistant

I have read several novels by the Austrian writer Joseph Roth (1894-1939) and can honestly say I have enjoyed them all. I recently bought Job in a secondhand book shop, and fellow Roth enthusiasts assure me I will not be disappointed. Roth, whose mode of living could be described as stateless or turbulent (and alcoholic and broke), lived much of his short life in hotels, writing in cafes and taverns in various European cities. His reputation as the voice of those whose homes and way of life were uprooted by 20th century calamities, or by fate itself, is well-known, and his work aches for a more humane time irretrievably gone. Job, based on the Biblical story, tells the story of Mendel Singer, a poor and pious Eastern European whose faith is tested at every turn. Other authors on-deck include favorite vintage noirsters David Goodis (F G) and Charles Williams (F W). — Steven McGuirl, Head of Acquisitions

During the Reign of the Queen of Persia | Joan Chase

Summer is the season of childhood. Long, hot days blur into a haze, summer after summer, and this haze becomes the fabric of perpetual personal knowledge, visceral and obscure. During the Reign of the Queen of Persia is a novel by Joan Chase about a grand-matriarch, her daughters, and their daughters, and the summers they spend together on the family farm in rural Ohio. Her writing captures the way I recall summers of my childhood: visions of people (especially family) in the heat of the long day together, ornamented with the sparkle of the sprinkler or the smell of pine forest. Touching on the inexhaustible themes of life, sex, and death, Chase tells the story of the Krauss family through the collective consciousness of its four youngest women. A proper pack, these girls simultaneously activate and absorb each other’s stories, those of their mothers, their grandmother, and the men that drift in and out of their lives. It’s a beautiful novel, and perfect for summer.—Erin Schreiner, Special Collections Librarian

Nicholas and his twin sisters are not happy being sent away for the summer from bustling NYC to his Great-Uncle’s house on Forsaken Lake. However, Nicholas finds himself surprisingly at home in the country—he learns to sail, works to finish a boat his father built, and makes a good friend. Nicholas even lands in a mystery when he discovers an old movie that his father made as a boy about a local legend, The Seaweed Strangler. The film was never finished, and Nicholas wants to know more. He and his friend work to uncover the truth, and they discover some family secrets along the way. This story has a wonderful nostalgic feel and is recommended to young mystery lovers or anyone looking for an “urban escape” this summer.—Carrie Silberman, Head of the Children’s Library

What’s hotter than a NYC sidewalk in July? How about a Texas summer in 1899, before air-conditioning? This is where Callie Vee Tate is living out her eleventh year, smack in the middle of her six brothers. As the only girl, Callie’s mother longs for her daughter to become “a lady” but Callie only wants to explore the outdoors, careless about how her romps inflict damage upon her delicate wardrobe. Callie’s curiosity fosters an unexpected relationship with her grumpy grandfather, himself an amateur naturalist. The intergenerational pair makes an accidental discovery that they share with the Smithsonian. While they anxiously await a reply, Callie matures, but in her own unique way. Author Kelly opens each chapter with an excerpt from Darwin’s The Origin of Species and neatly manages to tie it into to Callie’s evolution as the crescendo builds to the turn of the century. This is a wonderful summer read and I encourage you to find a cool spot where you can sink into its charms.—Susan Vincent Molinaro, Children's & Interlibrary Loan Librarian

In this delightful third story about the entertaining and unique Penderwick sisters, three of the four siblings head to idyllic Point Mouette, Maine, for a summer vacation with their beloved Aunt Claire. Since her oldest sister Rosalind is vacationing elsewhere, Skye is the Oldest Available Penderwick (OAP), a role she does not feel ready to fulfill. How will she put Batty to bed properly and make sure she doesn’t…explode? How can she prevent Jane from losing her dignity over a silly boy? Skye is thrilled when their much-loved honorary brother Jeffrey joins them in Point Mouette, and she begins to feel better about her temporary OAP status. Author Jeanne Birdsall introduces interesting neighbors into the mix, and the plot thickens in a surprising way that will keep readers turning the pages, laughing, and, maybe even crying a bit, until the last page. If you haven’t met the quirky Penderwicks yet, be sure to pick up the first two books, also great summer reads: The Penderwicks and The Penderwicks on Gardam Street.—Randi Levy, Children’s Librarian