This past year, I was drawn to two books about animals on opposite extremes of the sociability scale. American Wolf, by Nate Blakeslee, is an 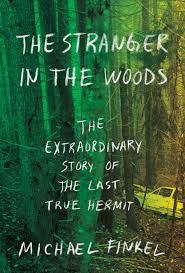 intensely gripping generational saga, with all the love, joy, grief, and internecine conflict you’d find in a human family drama.  Once completely eradicated in the West, wolves were reintroduced to Yellowstone National Park in 1995 and began to flourish. Blakeslee interweaves the stories of O-Six, the Lamar Valley pack’s formidable matriarch, and her brood, with that of the dedicated wolf watchers she inspires, and the locals who feel their way of life has been threatened by their new lupine neighbors. Michael Finkel’s The Stranger in the Woods, on the other hand, is an equally engrossing story about a loner who disappears into the Maine woods for twenty-seven years. Christopher Knight braves bitter Maine winters and black fly-ridden summers, and manages to avoid human interaction and detection as he goes about living a life of solitude, furnishing his secluded camp, clothing, feeding, and entertaining himself. Finkel investigates what it means to be a hermit (he discovers the slightly paradoxical Hermitary society), while detailing just how truly remarkable Knight’s tale is. —Carolyn Waters, Head Librarian

My favorite book this year was Madeline Miller’s Circe (ebook also available). Miller’s narrative follows the life of the half-titan, half-nymph Circe as she tries to find her place among the players of the Greek pantheon and the drama of their courts. Shunned, it seems, by nearly everyone, Circe's curiosity and cleverness appear to earn her a spot in this power-filled dynamic. However, much like Icarus, the overextension of her abilities quickly leads to trouble. Familiar figures among humans and deities appear in this world where titans and gods plot against one another, united only in their frustration with the recent ascension of mortals at the hands of Prometheus. Ever the resourceful being, Circe makes the most of her situation, and grants the reader a taste of life among the immortal. —Alexander Bolesta, Circulation Assistant

Edwidge Danticat is losing her mother. This is the starting point for the acclaimed writer’s most recent work The Art of Death: Writing the Final Story. Part tribute to her late mother and part literary criticism, Danticat draws on some of the most delicate passages on death, spanning works such as Toni Morrison’s Sula and As I Lay Dying by William Faulkner. Danticat herself has created some of the most touching portraits of death in The Dew Breaker and The Farming of Bones. Her deep personal experience and literary knowledge allows the critical component of the book to pierce the normally cloudy process of chronicling the loss of human life. Readers will be captivated as Danticat teases out the painful nuances of caring for her dying mother while weaving through some of literature’s most poetic encounters with death.  —lae sway, Circulation Assistant

Éric Vuillard’s The Order of the Day (ebook also available) is hard to categorize.  Vuillard has sifted through the abundance of historical material about Germany in the 1930s and winnowed his 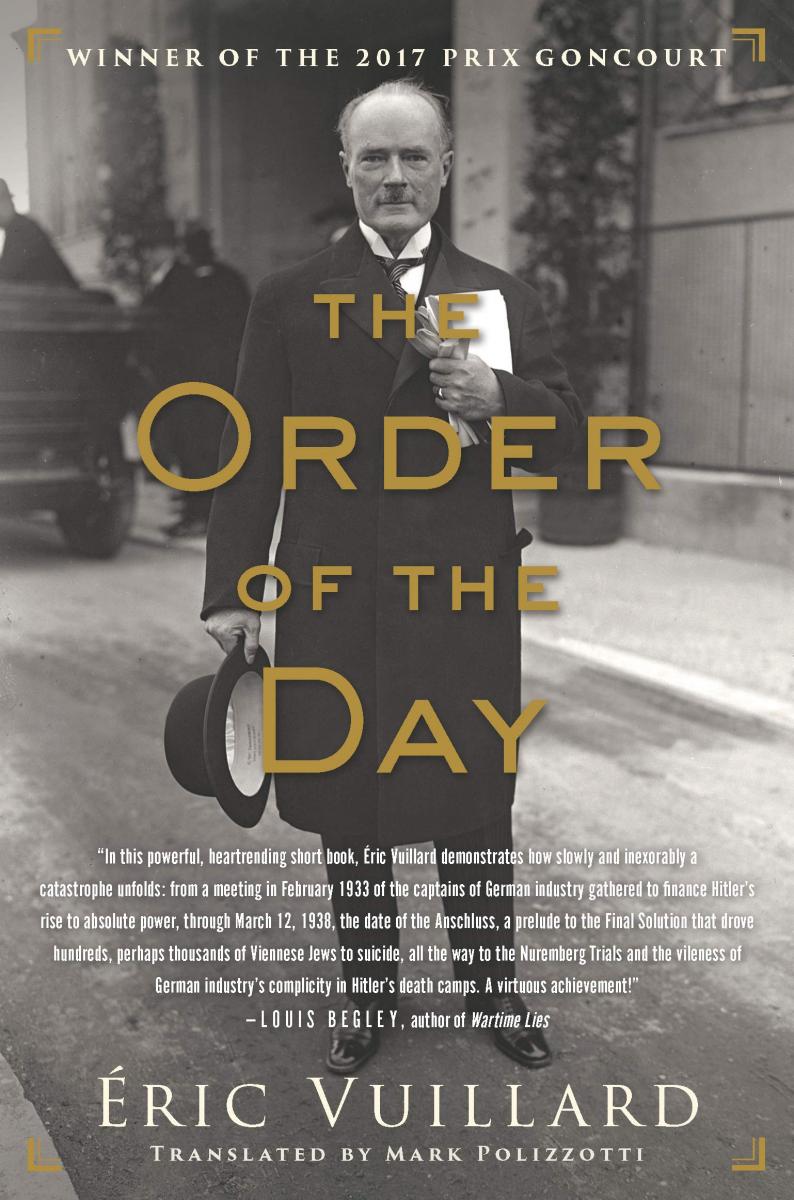 telling to a scant few facts.  Using these truths about the rise of the Nazi Party in Germany, the corporate complicity that aided its ascent, and the annexation of Austria, he weaves an odd sort of historical novel, adding some speculation about what might be in the minds of the people involved.  Though he cannot surprise his readers as the facts have long been available, Vuillard still manages to thrill all the while providing evidence against the inevitability of history.  Few people come off well in his account.  What does surprise is the way Vuillard is able to shape these facts that they cannot help but mirror our own current political crises back to us, though he never needs to say it and it’s all the more powerful for it. Not to be missed, for readers of fiction and nonfiction alike. —Patrick Rayner, Acquisitions Assistant/Circulation Assistant

Two unusual biographies filled gaping holes in my sense of 20th-century history last year. Lian Xi’s Blood Letters: The Untold Story of Lin Zhao, a Martyr in Mao’s China reconstructs the unique voice of one of Chairman Mao’s million+ victims – a brilliant student who stood fiercely for Communism until she saw through its cruelties. When they came for her, Lin Zhao maintained freedom of mind and soul to the end, despite mental and physical isolation, torture, and ill health, using her own blood to rage poetically against the darkness. The Franciscan friar Mychal Judge ironically attained world fame as NYC’s first recorded death on 9/11/01, having lived, for the 68 years prior, one of the city’s most vibrant lives: “Some Mother’s Son. 230 Dean St. Irish, Catholic, Democrat, priest, gay and more.” The portrait of this outspoken, loving, and lovable character in Michael Ford’s Father Mychal Judge: An Authentic American Hero is full of personal tributes and excerpts from Judge’s public and private writings, and it tells his life much better than the next book over on the shelf (by Michael Daly).  —Sara Holliday, Head of Events

As a Young Adult Librarian, I read a lot from the YA genre; nearly 40 books in 2018, if my records are correct. But the standout for me was Courtney Summers’s latest novel, Sadie. Chapters 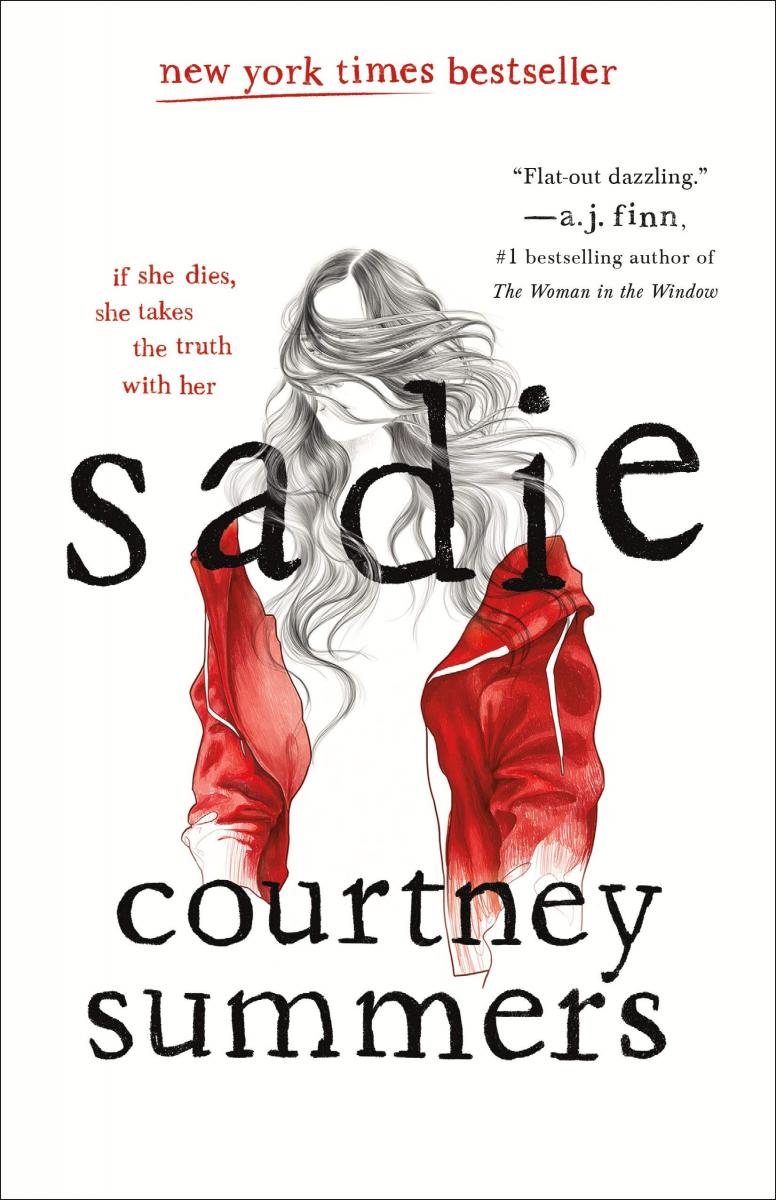 alternate between podcast transcripts from a NYC-based program and the story provided by the main character Sadie, a poor Colorado-based girl, who having just lost her younger sister, decides that she is going to hunt down the killer herself. Since starting her search a year ago, Sadie has vanished, and the podcaster has been roped into following her trail. Each chapter ends with a twist that will keep readers turning the pages until the conclusion of this intoxicating mystery. If you’re already a YA lover, you’ve likely heard about this book, but if not, I think Sadie would make a great foray into this genre. The Library has the book in both print and as an audio download; the latter might be fun with the podcast element. —Susan Vincent Molinaro, Children's and Young Adult Librarian

2018 was a great year for reading, making it difficult to narrow down my favorites. Over the summer I blew through Nico Walker’s debut novel, Cherry. Poignant and darkly funny, the story follows a wayward protagonist in the mid-2000s as he falls in love, ships out to Iraq, returns stateside with a rampant opioid addiction, and begins robbing banks in order to fund his dependence. Walker, who served as a medic in Iraq and is currently incarcerated for bank robbery, claims the book is not an autobiography. From the Young Adult collection I read Hey Kiddo (ebook also available) by Jarrett Krosoczka. Krosoczka’s graphic novel depicts his own childhood, growing up as the son of his gruff grandparents while his heroin-addicted mother enters and exits his life over the years. In a story that is at once funny and heartbreaking, Krosoczka lovingly details his colorful family members as flawed figures doing the best they can while his character aches for more. Timely and important, these novels both portray the effects the heroin epidemic has on the addicted and those surrounding them.  —Morgan Boyle, Assistant Children's & Young Adult Librarian

Two books that I found poignant in 2018 were Translation as Transhumance by Mireille Gansel and The White Book by Han Kang. Gansel’s book reflects on her work translating prominent poets from pre-war Germany and Vietnam into French volumes. In a scarce 107 pages, she invites the reader to think on the meaning of translation as well as what continues to exist within sound and script long after the world has changed it. Kang’s book is also a meditation on how things exist in space, old and new, destroyed and recreated. In The White Book, Kang takes the reader through a snowy city [where] “there is nothing that has existed for more than seventy years”. At the same time, she remembers her mother’s first child, who died within hours of birth and whose shadow is ever present. —Ashley-Luisa Santangelo, Bibliographic Assistant

An Elderly Lady Is Up to No Good (ebook also available), by Helene Tursten, wins the title of 2018’s most fun read for me. The reader is kept in the know about what 88-year-old Maud is up to 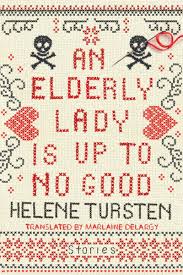 in her large, old apartment in Gothenburg, Sweden, but this small mystery novel (just six inches tall) manages to be full of surprises and wicked laughs. Author Helen Tursten, best known for her crime fiction featuring Detective Irene Huss, said she wanted to write something from the other point of view! —Cathy McGowan, Circulation Librarian

Jason Reynolds’ award winning Young Adult novel-in-verse, Long Way Down (ebook also available), is a breathtaking tale of gun violence and its exponential aftermath. The story is told in the time it takes for the elevator to descend seven floors. In the elevator is 15-year-old Will—with his brother’s gun tucked into his jeans—who has to decide what to do two days after his brother has been shot and killed. Will he follow the Rules: don’t cry, don’t snitch, always get revenge? On every floor, Will encounters each of the loved ones he has lost to a chain of gun violence, all with their own take on what Will’s next move should be. This compelling book draws the reader into a world where the culture of survival is distilled to Get/down/with/some/body/or/get/beat/down/by/some/body. —Randi Levy, Head of the Children’s Library

Washington Black (e-book also available) by Canadian author Esi Edugyan is easily one of the best books I've read in years. It’s a timely work of historical fiction that I recommend to anyone who likes elegant writing, art and natural history, and epic storytelling. Both Washington Black and her 2011 book Half-Blood Blues, which I also recommend, were shortlisted for the Man Booker Prize in their respective years.  —Mia D’Avanza, Head of Circulation

Diversions and distractions both bad (a relentless news cycle) and good (new puppy) in 2018 kept me from reading more than I care to admit, but a few new books stood out. Books are Made Out of Books: a Guide to Cormac McCarthy's Literary Influences by Michael Lynn Crews digs deep into McCarthys’ manuscript collection in the Texas State archives.  Crews offers sharp critical readings of McCarthy’s novels, and as an exploration into how others’ books can inspire and influence a writer (and be pillaged for occasional creative thievery), this is a fascinating and revealing study.  McCarthy reads widely, so the book also offers quality grist for future reading lists.  Downtown Pop Underground by Kembrew Mcleod is an exemplary cultural history of 1960s New York below 14th Street. McLeod corrals a sprawling cast of characters from the worlds of rock and roll, film, Warhol’s factory, drag queens, poets, hippies, off-off Broadway theatre, dive bars, and more to show how these scenes overlapped and influenced each other.  McLeod’s research is prodigious, but he deploys it with a light touch.  Finally, “An Album Quilt,” from John McPhee’s latest The Patch (ebook also available), weaves fragments of articles from over 250,000 career-spanning words into fine reading for those of us with a fragmented (3 trains/2 transfers) commute. —Steven McGuirl, Head of Acquisitions