Home > Our Events > David Jaher, The Witch of Lime Street: Séance, Seduction, and Houdini in the Spirit World 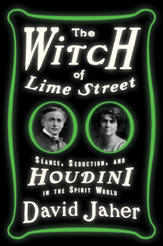 David Jaher, The Witch of Lime Street: Séance, Seduction, and Houdini in the Spirit World

History comes alive in this textured account of the rivalry between Harry Houdini and the so-called Witch of Lime Street, whose iconic lives intersected at a time when science was on the verge of embracing the paranormal.

David Jaher received a BA from Brandeis University and an MFA in Film Production from New York University. At NYU, he was the recipient of the WTC Johnson Fellowship for directing. Jaher has been a screenwriter and a professional astrologer.