Home > Our Events > Lecture: Margaret A. Oppenheimer, The Remarkable Rise of Eliza Jumel: A Story of Marriage and Money in the Early Republic 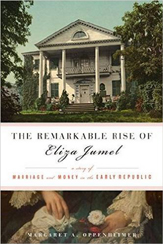 Lecture: Margaret A. Oppenheimer, The Remarkable Rise of Eliza Jumel: A Story of Marriage and Money in the Early Republic

Born Betsy Bowen into grinding poverty, the woman who reinvented herself as Eliza Jumel was raised in a brothel, indentured as a servant, and confined to a workhouse when her mother was in jail. Seizing opportunities and readjusting facts to achieve the security and status she so desperately craved, she obtained a fortune from her first husband, a French merchant, and nearly lost it to her second, the notorious vice president Aaron Burr. Divorcing Burr promptly amid lurid charges of adultery, she lived on triumphantly to the age of ninety, astutely managing her property and public persona. By the end of her life, “Madame Jumel” was one of New York’s richest women, with servants of her own, an art collection, an elegant mansion, a summer home in Saratoga Springs, and several hundred acres of land. After her death, a titanic battle over her estate went all the way to the United States Supreme Court twice.

Although Jumel was the child of an illiterate mother, reading became her favorite pastime. In this talk, Margaret Oppenheimer will focus on Jumel as a reader and writer. She will discuss how the future Madame Jumel would have learned to read during the Revolutionary era, her subscriptions to books as a young matron, and above all her reading habits as a member of the New York Society Library. She will also touch on Jumel’s activity as a letter writer.

Margaret A. Oppenheimer holds a Ph.D. in art history from New York University. She is the author of The French Portrait: Revolution to Restoration (2005), the collaborating writer of the first edition of Art: A Brief History (2000), and a contributor to A Personal Gathering; Paintings and Sculpture from the Collection of William I. Koch (1996). Her articles have appeared in Apollo, the Metropolitan Museum Journal, The Magazine Antiques, and other publications. She volunteers as a docent at New York’s Morris-Jumel Mansion, Eliza Jumel’s former home.