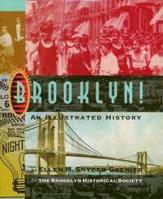 From Sicily to Singapore, from Bangor to Berkeley, mention Brooklyn and almost everyone will have a memory or an image of that sometimes venerated, sometimes beleaguered, ever-changing borough. Although I was born in the Bronx and grew up in New Jersey, my great grandmother was an immigrant who found a home in Brooklyn and, I am told, had a candy store in Flatbush -- where my father's family also lived for a time. The say that one out of every seven people has a connection to Brooklyn, and I guess that's probably true. My own firsthand acquaintance with Brooklyn began after I had finished graduate school at Winterthur in Wilmington, Delaware, and got a job at the Brooklyn Historical Society. In the course of my nine years there, I was curator of collections, of exhibitions, and then chief curator, and over many years we conducted a broad spectrum of research projects, many of which served as the basis of my book.

In Brooklyn! An Illustrated History I have endeavored to explore the borough's image and rich history through the unsurpassable collections of the Brooklyn Historical Society. I've used five larger-than-life points of entry into what makes Brooklyn, Brooklyn -- the Brooklyn Bridge, Brooklynites themselves, the Brooklyn Navy Yard, Coney Island, and the Dodgers -- emphasizing the complex tapestry of developing neighborhoods, striving immigrants, melding -- and sometimes clashing -- cultures, as well as the booming and stagnating economic cycles. Above all, I've tried to fill the book with stories -- stories that spring from the creative union of the city's rich heritage, the cultural diversity brought by wave after wave of new residents, and the energy of its people. Such tales of human hopes and hard work, of community building, of cooperation and mutuality of interest rarely make the evening news or the front page. Yet the give heart and soul and life to the borough's brownstones and bridges, to Coney Island and Brooklyn Heights -- to every block in every neighborhood that is the special place called Brooklyn.