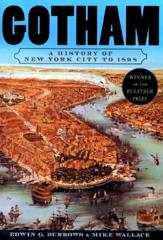 Award for a Photographic Work

Award for an Unusual Topic

At last there is a cure for every New York insomniac. There is no reason to sleep or even drift into random anxiety when there is Phillip Lopate's extraordinary collection to dip into repeatedly. With almost a musical touch for theme and variation, Mr. Lopate has brought Louis Auchincloss, Allen Ginsberg, and Willa Cather together. This text, from the writings of James Fenimore Cooper to James Baldwin, has all the rhythm, elegance, and grit of the city. A city and a literary history emerge that give those of us who still live in New York - or remain New Yorkers in our minds - a genuine sense of home.

Juror Joan K. Davidson on New York: An Illustrated History of the People:

Exactly seventy years after Isaac Newton Phelps Stokes completed his retrieval of the visible evidence of the emerging infrastructure of New York City, and forty-five years after John Kouwenhoven gave us the graphic revelation of its developing form and features, Allon Schoener has put before us nothing less than the picture of all New York's people. What a great historical portrait. Schoener, inspired by the design scheme of Massimo Vignelli in Harlem on My Mind, gives us page after page of new-found images that bubble with informative detail and bolsters them with quotes and observations, illuminating the side-ways of population growth.

Maureen Montgomery works with debutantes' diaries, correspondence between spooning couples, obscure gossip periodicals, and successive editions of etiquette guides, to depict vividly the social customs and confines of upper-class New York women in Edith Wharton's time. At the same time, Dr. Montgomery has brought out opinions and attitudes that shaped the new metropolis, including the vulgarity of electric light, the "cold-heartedness" of Swedish servants, and the new glare of the media on formerly private lives in the late nineteenth century. This is a model for a microscope-like study of a special topic.