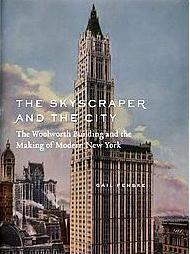 The Skyscraper and the City: The Woolworth Building and the Making of Modern New York by Gail Fenske (University of Chicago Press)

The awards presentation took place May 6, 2009.

Presenter Christopher Gray on The Skyscraper and the City:

The Woolworth Building is one of the most iconic of New York City structures, and it has no abler chronicler than Gail Fenske. If you think you know everything about this very familiar landmark, then this is the book for you. It is so riveting to see the complex personal interplay between owner and architect Frank Woolworth and Cass Gilbert. The New York Society Library is very privileged to give this year's New York City Book Award to Dr. Gail Fenske.

Gail Fenske speaks about the construction and history of the Woolworth Building.