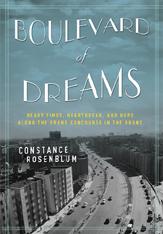 Boulevard of Dreams: Heady Times, Heartbreak, and Hope Along the Grand Concourse in the Bronx by Constance Rosenblum (NYU Press)

The Hudson-Fulton Celebration: New York's River Festival of 1909 and the Making of a Metropolis by Kathleen Eagen Johnson (Fordham University Press)

Mitzvah Girls: Bringing Up the Next Generation of Hasidic Jews in Brooklyn by Ayala Fader (Princeton University Press)

The awards presentation, hosted by Adam Gopnik, took place May 5, 2010.

The book recreates the excitement of the celebration, exploring a seminal moment in New York’s history in its glorious achieve­ments, and the prosaic complexities of an emerging metropolis poised to lead in the new century.

Fader does more than reveal a society closed to outsiders: we end with a deeper understanding of these young women’s lives, so rigidly bound by mitzvot (commandments) while they try to negoti­ate modern life in New York City.