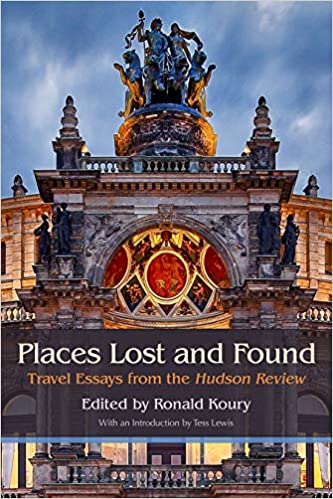 Ronald Koury and writers from the Hudson Review celebrate a treasury of unique and wide-ranging contributions, all establishing a sense of place, its history and significance.

The Hudson Review has always had an international focus. Travel and reports from abroad have figured prominently in the journal, including essays on exotic and picturesque locales, as well as accounts from war-torn areas and the experiences of exiles. Many of these are pilgrimages; others are harrowing memoirs. What unites even the most devastating of these accounts are intellectual curiosity and a spirit of adventure. Places Lost and Found is a treasury of distinctive and compelling essays selected from six decades of the Hudson Review. From a description of the gardens of Kyoto and a portrait of Syria just before its civil war to reflections on Veblen and the Mall of America, these essays explore an array of places that are deeply layered with history and meaning. The stunning cover photo of the Semper Opera House in Dresden encapsulates many of the themes of the book: war and its aftermath, the importance of the built environment in any discussion of “place,” the endurance of civilization and resilience, and of course the romance of travel.

Book Editor Ronald Koury, who joined the Hudson Review in 1981 and has been its managing editor since 1985. He is also the editor of Literary Awakenings: Personal Essays from the Hudson Review.

Tess Lewis, the event's moderator, is a prize-winning translator from French and German and wrote the Introduction to the book.

Brooke Allen teaches History of Thought in the Bennington Prison Education Initiative.  Her “Letter from Damascus” recounts her personal journey through Syria prior to the civil war when ancient monuments were still intact. Her talk will be illustrated with views of this disappeared world by her husband, the architectural photographer Peter Aaron.

Laurie Olin, the award-winning international landscape architect, wrote about his boyhood experiences in Alaska in “From Sundogs to the Midnight Sun: An Alaskan Reverie.” He will accompany his memories of growing up in the Territory’s rural areas with his own evocative pen-and-ink drawings, for which he is renowned.

Frederick Brown, emeritus professor of European Languages, Literature and Cultures at Stonybrook University, has translated Alexis de Tocqueville’s perceptive Letters from America. In discussing their import, he will read a few of the most observant ones. Brown is also the biographer of Emile Zola and Gustave Flaubert.

This event is co-sponsored by the Library and the Hudson Review.

This event is part of The Writing Life. Writing Life events in 2021 are generously underwritten by Jenny Lawrence.