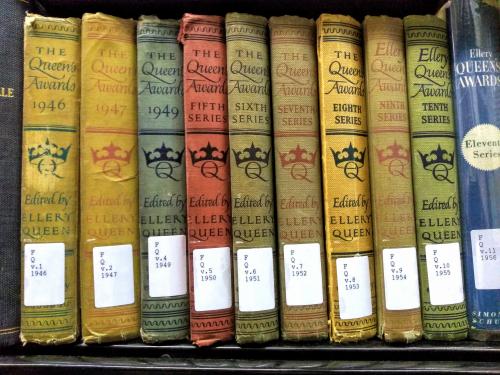 Taking the Mystery Out of Ellery Queen’s Mystery Annuals

Searching for a mystery anthology shouldn’t require the help of a private investigator! Recently, the NYSL cataloging department took the detective work out of locating the historic Ellery Queen Mystery Annuals by grouping them all together on stack 6, adding new labels (with chronological designation) for easier finding on the shelves, and updating their online catalog records to be keyword searchable (so you can sleuth for your favorite mystery author by name, or by story title). This increased accessibility not only aids members in locating materials, but also improves the visibility of the NYSL’s impressive mystery holdings. 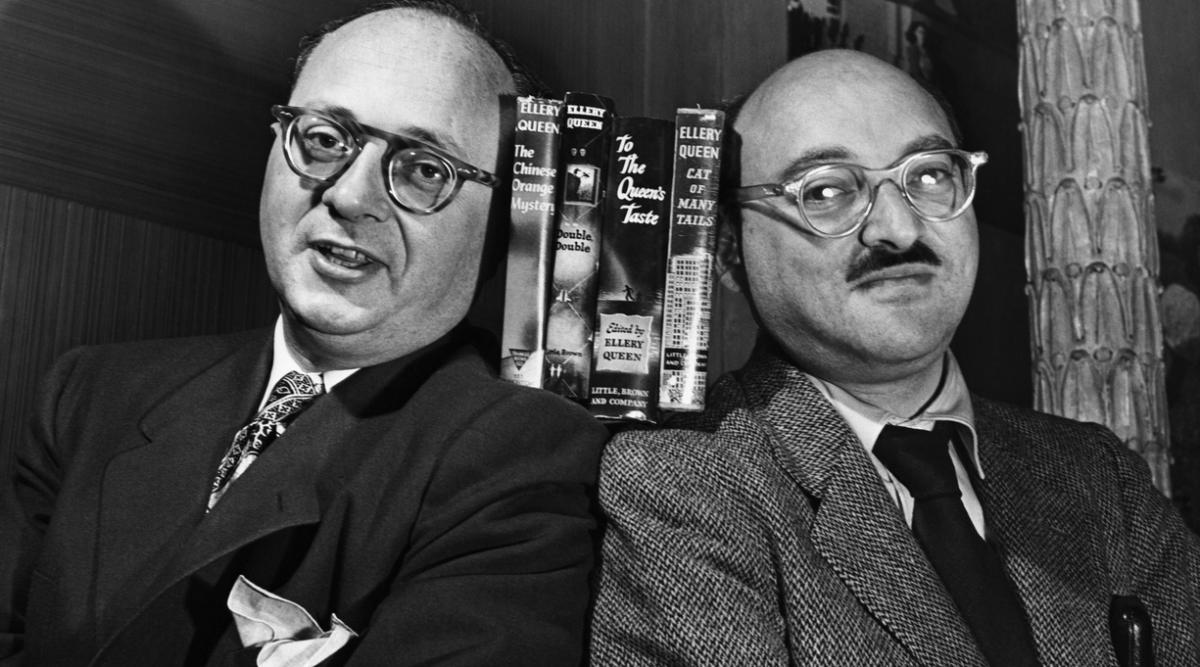 If you’re not familiar with the name Ellery Queen, and its importance to the mystery genre, here’s a brief introduction. “Ellery Queen” was both the shared pseudonym of Brooklyn-born cousins Frederic Dannay (1905–1982) and Manfred Bennington Lee (1905–1971), as well as the name of their shared creation, a Big Apple novelist (who writes mysteries, of course). Ellery’s knack for figuring out “whodunnit” extended beyond the page, and Dannay and Lee chronicled Ellery’s adventures as he and his father (police inspector Richard Queen) solved crimes together. Ellery’s first outing was in The Roman Hat Mystery (1929), and he ultimately appeared in a total of 36 novels penned by the cousins between 1929 and 1971, and in many more short stories. There were even Ellery Queen novels ghosted by other authors, making EQ one of the most popular characters of American mystery fiction.

Arguably Dannay and Lee’s longest-lasting influence, however, was not their own fiction, or their beloved character, but their work as anthologists, and as creators of Ellery Queen’s Mystery Magazine. EQMM began in 1941 (and continues to this day), and offered a more prestigious contrast to the newsstand pulp offerings (though they sometimes shared authors, such as Cornell Woolrich and Fredric Brown). In addition to publishing many of the best-known American mystery writers, EQMM also sponsored the Queen’s Awards, honoring the year’s best in crime fiction, which began in 1946 and spawned a series of anthologies that lasted for nearly three decades. While Dannay and Lee edited innumerable collections throughout their career, their Mystery Annuals (as they ultimately came to be called, after many name changes) hold a special place in the annals of crime fiction, chronicling many of the biggest talents in mid-century crime fiction: Agatha Christie, Georges Simenon, John Dickson Carr (or his pseudonym Carter Dickson), Elisabeth Sanxay Holding, and Charlotte Armstrong, just to name a few. 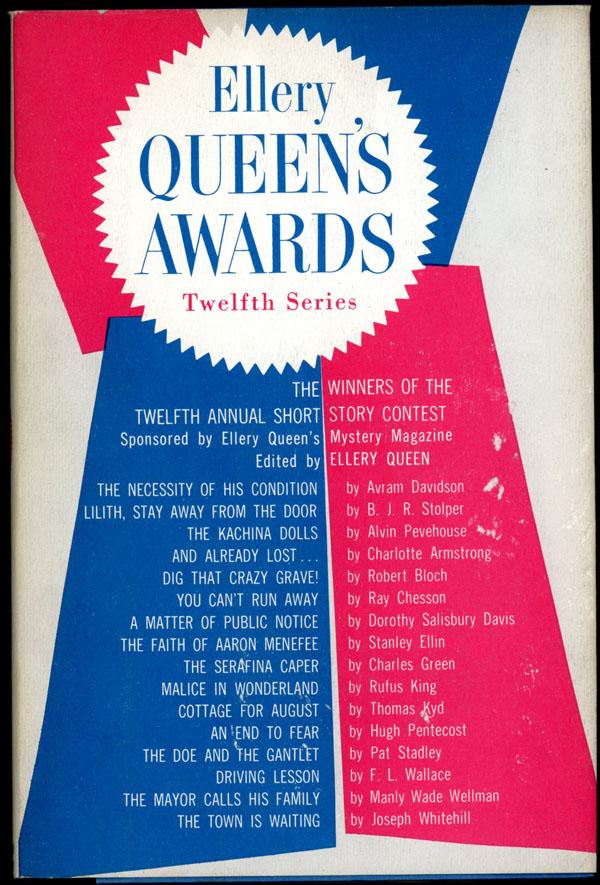 The complexity of the Mystery Annual’s title changes throughout its 30-plus year span is where the detective work of cataloging the Ellery Queen anthologies began. Dannay and Lee called the first 8 anthologies The Queen’s Awards, named after the titular award. The next four volumes appeared as Ellery Queen’s Awards. The awards themselves went on hiatus in 1958, promoting the change to Ellery Queen’s Mystery Annual. Beginning in 1962, volumes highlighted selections from that year’s EQMM and received unique titles, such as To Be Read Before Midnight.

What made organizing these books here at the NYSL so challenging is that anthologies are not traditionally cataloged by their editor, but by their title. This meant that, depending on the first word of the title (excluding “The”), the Mystery Annual anthologies were spread throughout the Library. But not any longer! Now, they are all conveniently collected under “Q” (because the first entry was titled The Queen’s Awards).

In addition to physically reuniting the series on the shelf, we’ve upgraded their records to include the full contents of each volume, meaning that you can search our online catalog (using the “keyword” option) for your favorite writer, or even by short story title. For instance, a search for “Craig Rice” now retrieves not only her novels, but also The Queen’s Awards and Ellery Queen’s Annual.

Making the Ellery Queen annuals more accessible here at the NYSL is particularly fitting, as before the series began, our impressive mystery holdings already attracted the eye of one half of “Ellery Queen.” Dannay, having been told that NYSL held “one of the largest collections of detective stories in the country,” wrote our Library a letter on January 14, 1943 asking for more information about our holdings. Assistant Librarian Marion King replied, “We do not shelve the detective stories separately and have no accurate record of the number, nor do we catalogue them into short story types, etc.”

Nearly eighty years have passed since Dannay wrote to us, but we’d like to think that he would be pleased with our recent cataloging project to improve access to our distinguished mystery holdings.