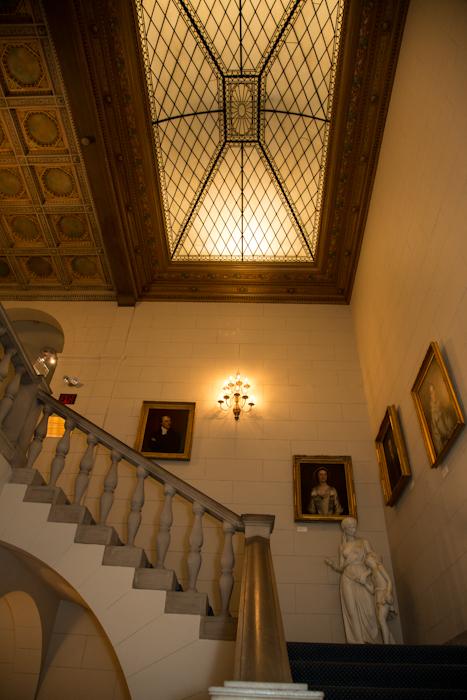 Completely searchable and easy to use, The Chicago Manual of Style Online is a standard reference source for recommendations on editorial style and publishing practices. The online version includes the full contents of the 16th and 15th editions, as well as the popular Chicago Style Q&A.

This is the online edition of the 20-volume OED, widely regarded as the accepted authority on the English language and an unsurpassed guide to the meaning, history, and pronunciation of 600,000 words—past and present—from across the English-speaking world. Each word entry includes: etymology, definition, part of speech, date of origination, pronunciation, quotation, and cross-references.

Worldcat Discovery allows researchers to search the collections of libraries around the world. Not all of the New York Society Library’s holdings can be found in Worldcat, so it is best to begin with a search of our catalog then, if needed, search Worldcat Discovery.

JSTOR offers Library members full-text searchable access to articles from the back issues of nearly 2,000 scholarly journals across the arts and sciences. Articles display as PDF images, and can be printed or saved to a computer. Create a "My JSTOR" account to save citations and searches, receive email alerts for saved search results, and more. Using JSTOR & Project MUSE

The Project MUSE database includes full-text articles in nearly 400 humanities and social sciences scholarly journals, including current content. Library members also have access to nearly 2,600 backlist university press e-books in the subject of history. The e-books may be downloaded as PDFs to your computer in chapters with no loan periods. Using JSTOR & Project MUSE

ProQuest is a suite of databases containing current and historical content of several major U.S. newspapers, includingThe New York Times going back to the year 1851. It also includes a digitization of The New York Times Index, which allows users to further refine their searches by subject, location, person, creative works, and company/organization. Databases include:

ProQuest is available for in-Library use only.

The Library is pleased to offer this easy-to-use digital version of a source that has been a standard in print reference collections for decades. The database includes indexing and abstracting for over 400 publications back to 1983, and the full text of articles from over 200 publications going back to 1994, covering a wide array of subjects. Patrons can use basic and advanced search templates or browse, and can e-mail, print, or save search results. The database is updated daily.

OverDrive Magazines is a “digital newsstand” that allows Library members to download and read current and recent issues from our collection of e-magazines on a computer or portable device.

American Book Prices Current is a searchable database with records of books, manuscripts, autographs, maps, and broadsides sold at auction beginning in September 1975. ABPC is a useful tool for dealers, appraisers, and scholars, or anyone who is curious about the rarity or monetary value of a book or manuscript.

American Book Prices Current is available for in-Library use only.

Book Review Index Plus features over 600,000 full-text book reviews and millions of review citations culled from over 400 periodicals, scholarly and popular. Coverage begins in the mid-1960s and continues through the current year.

A bibliographic database of over 7.5 million U.S. book, audiobook, and video titles, as well as 12 million international titles, currently in print. The database also includes bibliographic information on forthcoming and out-of-print books, and reviews from publications such as Publisher's Weekly, Booklist, Choice, and Library Journal. Entries include tables of contents, publisher's descriptions, cover images, author biographies, and awards information.

The complete Loeb Classical Library in digital form: More than 530 volumes of Latin, Greek, and English texts in a modern and elegant interface that allows readers to browse, search, bookmark, annotate, and share content with ease. Access is made possible by the Kallisto Fund for Ancient Cultures & Civilizations.

With a list of contributors that reads like a "who's who" of late 20th century intellectual life, the London Review of Books has been an esteemed source of analytical book reviews and thoughtful essays since 1979. This database contains every review and essay published in the magazine since its founding—over 12,000 articles—and is fully searchable. Users can also browse by issue or contributor.

Now in its fourth edition, Masterplots is an old standby in literature reference collections. The work of 700 academics and independent scholars, the digital version contains the entire newly revised 12 volume edition, with 2,220 essays summarizing and analyzing works of fiction, nonfiction, poetry, and drama.

A full-text database that offers users multiple ways to search or browse reviews and articles from the acclaimed magazine's founding in 1963 through the current issue.

Using Oxford Art Online, Library members can access and simultaneously cross-search acclaimed art reference works published by Oxford University Press: The Grove Dictionary of Art, The Benezit Dictionary of Artists, The Encyclopedia of Aesthetics, The Oxford Companion to Western Art, and The Concise Oxford Dictionary of Art Terms. The Benezit Dictonary of Artists contains 170,000 entries on artists from antiquity to the present day, plus thousands of auction records, museum holdings, and bibliographies, and includes images of artists' signatures, monograms, and stamps. Grove Dictionary of Art includes 40,000 authoritative articles on artists, architects, and more. Content is revised and updated and new articles are added regularly.

Back issues of the Times Literary Supplement are among the prime sources of twentieth-century British cultural history. With the TLS database, which includes material dating back to the journal's first appearance in 1902, members can search by a book's title or author, by contributor, or under listed subject-headings. Additionally, the online version of the TLS includes the names of the contributors, who until 1974 were uncredited.

Created and maintained by the University of Virginia, this database contains fully-searchable digital versions of the papers of major figures of early American history. Users can search any of the following publications or across the entire database:

Members can search and browse this digital edition of Oxford University Press's 24-volume reference set published in 1999. The database is updated semi-annually: new entries are added and previously published entries are revised for accuracy and currency. Each of the 18,700 entries contains a descriptive bibliography, and the database contains over 80,000 linked cross-references.

City Readers is a database of historic records, books, and readers. Search, browse, and visualization tools support the discovery and analysis of over 100,000 biographic, bibliographic, and transaction data, derived from digitized content from our archives. Circulation records from 1789 to 1805, when the Library shared Federal Hall with the first American Congress, have been fully digitized and transcribed, and the data is now available for free through City Readers. By providing detailed metadata for the books and readers documented in the charging ledgers, City Readers is a virtual reconstruction of the Library as a social and literary institution in New York at the turn of the eighteenth century.

Historical Statistics of the United States

The electronic edition expands and enhances the Cambridge University Press 5-volume set published in 2006. Covering a vast range of topics, this is the source for quantitative facts of American history. Numerous essays place the statistical tables in historical context, and all of the database's content is searchable. Tables may be downloaded and customized.

Marquis Biographies Online contains over 1.5 million profiles from more than twenty titles published in the Marquis’ Who’s Who series since 1985. The database also includes 110,000 biographies culled from the Who Was Who in America series (1607-1985). Updated daily, MBO offers users the ability to create targeted searches using 15 search criteria.

The Oxford Dictionary of National Biography is the national record of men and women who have shaped British history and culture from the Romans to the 21st century. The DNB offers concise, up-to-date biographies written by named, specialist authors. The database also includes the complete text of the original 33-volume print edition, plus over 10,000 portrait images.

People of the Founding Era

Published by the University of Virginia and drawn from the papers of the Founding Fathers and other documents of the era, People of the Founding Era provides biographical information on over 25,000 people born between 1713 (the end of Queen Anne's War) and 1815 (the end of the Napoleonic War). The database features identically-structured data for each person allowing for group (gender, occupation, etc.), or prosopographical, study.