In this installment of staff book recommendations, the focus is on authors who have turned their gaze and writing skills upon their own families. For more, see Writing My Life, posted several years ago and featuring Library staff's favorite memoirs, autobiograhies, and published journals.

Thomas Fleming | Mysteries of My Father: An Irish-American Memoir 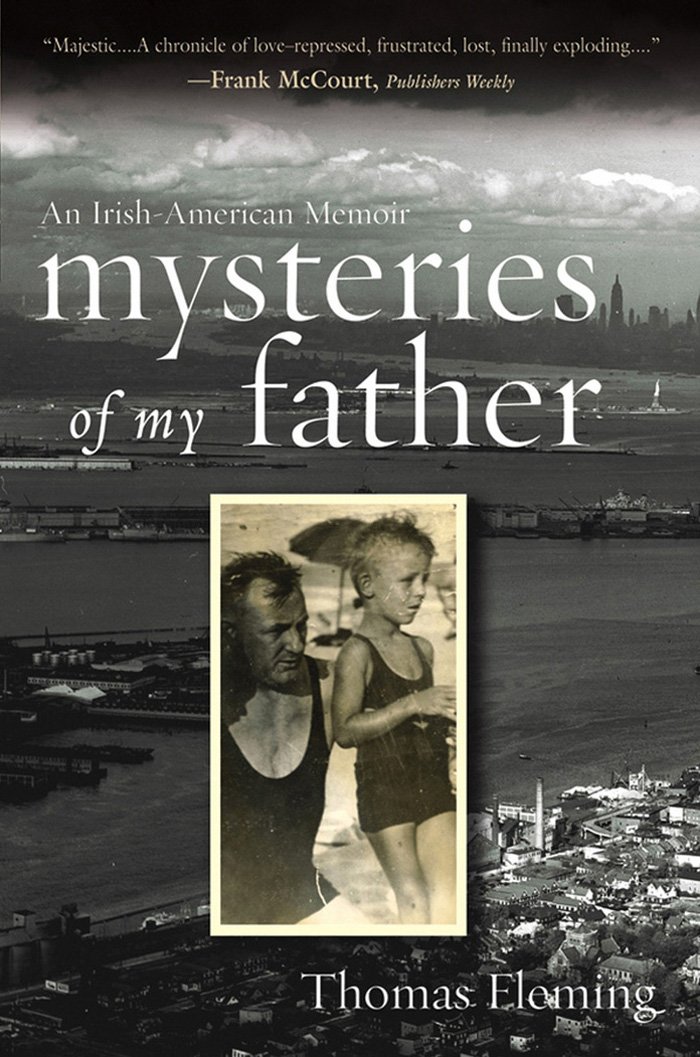 After inhaling Frank McCourt's memoir trilogy, I reached for this book praised by McCourt, from the pen of prolific historian (and Library member) Thomas Fleming. The story of Fleming's family and youth is also the story of colorful, hard-bitten Jersey City in the 20th century, where his father, a giant force of nature and nurture, made many wheels turn in Frank Hague's legendary political machine. There's also much to learn about the battlefields and aftermath of both world wars, the power and failings of the Catholic Church, and the resonance and drawbacks of being a "hyphenated" American. Historian Fleming draws a portrait of his parents broader and deeper than the child's eye only - yet, as the title suggests, humans can remain mysterious even to the keenest-eyed researcher and observer.

Also recommended in a different vein: Cea Sunrise Person's tale of an extraordinary childhood among back-to-the-landers, North of Normal. Film adaptation due out next year. Oh, and you can stream Hayden Herrera's discussion of Upper Bohemia: A Memoir, or Russell Shorto's event on Smalltime: A Story of My Family and the Mob, among others, from our website –Sara Elliott Holliday, Head of Events 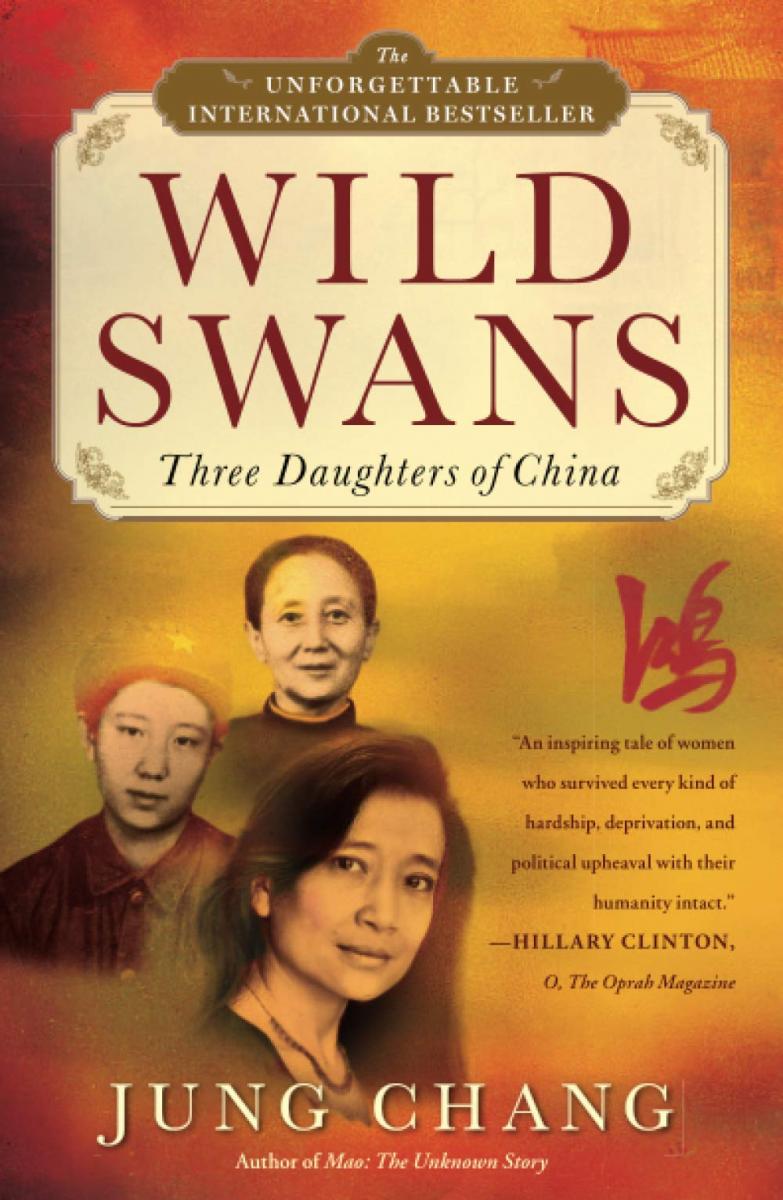 Jung Chang's Wild Swans is the saga of three generations of women, from Chang's bound-footed concubine grandmother, to her Communist Party official mother, to Chang herself, a former Red Guard whose disillusionment with the Chinese government led to her eventual expatriation. Beyond the family, it's also a chronicle of China's 20th century. The Chang women's front row seats provide an unobstructed and all-too-perilous view of the action, beginning with the end of the Warlord Era and moving through the rise of Maoism to the Chairman's eventual death. It's a memoir both big and small: the sweeping made personal, a story folded into history. —Kirsten Carleton, Circulation Assistant

While there are quite a few accounts of the Bingham family dynasty in our collection, one that sizzles is by heir Sallie Bingham. Passion and Prejudice: A Family Memoir is NYSL member Bingham’s account of her privileged 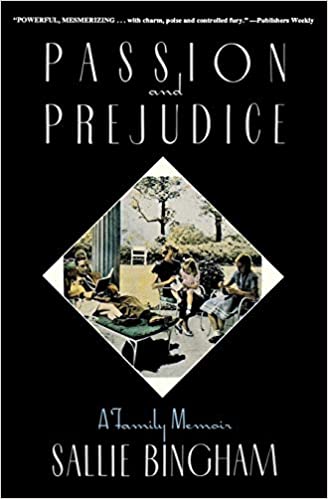 upbringing, her struggle to assert herself in the family and in the patriarchal media empire they controlled, and the eventual sale of the Louisville Courier-Journal that her own actions set in motion.  At the heart of the memoir is the passion with which Bingham fights for feminist representation.

Bingham continued her activism and quest to champion women’s lives by endowing the Kentucky Foundation for Women and the Center for Women’s History and Culture at Duke University. And in The Blue Box: Three Lives in Letters, she uses the contents of found documents to place the stories of three generations of women—her mother, grandmother, and great-grandmother—front and center. How many of us have found our own family’s blue boxes filled with diaries, scraps of notes, and photographs, and yearned to knit it together in a family memoir? Bingham’s engaging book shows the way. —Carolyn Waters, Head Librarian

The frontlines of the gay liberation movement the 1970s is not the most likely place to find a young girl.  Yet bohemian San Francisco is the unusual setting for Alysia Abbott’s memoir of her childhood.  Her parents met and fell in love at SDS meetings.  Though outwardly conventional, Barbara Bircher and Steve Abbott maintained an open 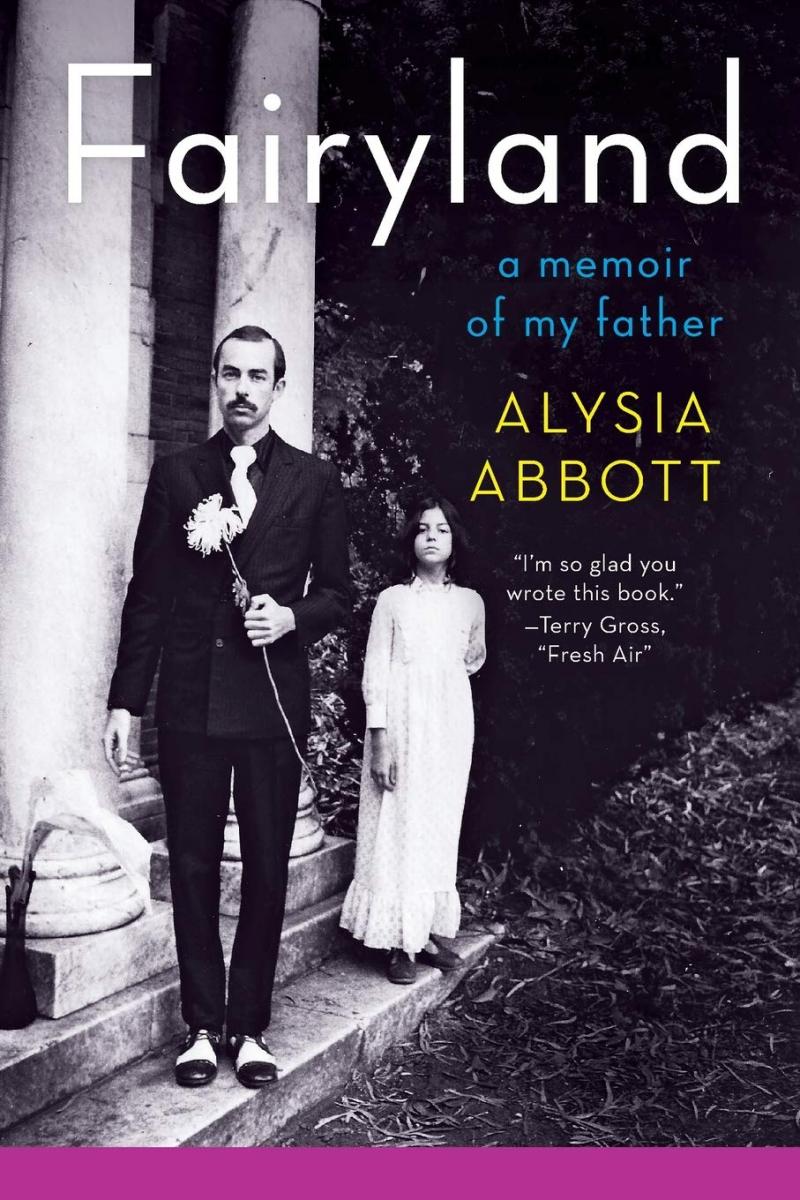 relationship, and Steve had affairs with men and women even after they married in 1969.  Alysia was born shortly after, and all was well until 1973 when her mother died in a car accident.  In his grief, Steve moves them to California to begin a new life.  He finds himself politically and romantically involved with the gay men who’ve settled into the Haight and ekes out an impoverished existence for him and his daughter with odd jobs and the occasional writing gig. She constructs this memoir with ample help from her father’s papers, and the book benefits from both voices.  She is fair about the many ways they fail each other, but more often, this is a story of a family making it work in difficult circumstances. It’s hard to imagine that many of the gay men living in San Francisco during the AIDS crisis were raising children, which adds a unique voice to this well chronicled era. —Patrick Rayner, Acquisitions Assistant / Circulation Assistant

James McBride | The Color of Water: A Black Man’s Tribute to His White Mother 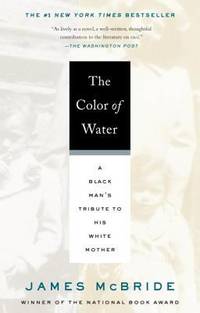 The first time I read The Color of Water was at a time I needed it most. I connected with McBride, who struggled with his own yet familiar desire to know who he was: “Is he… / Am I Black?” “Is he… / Am I White?” I understood the turmoil of being "not enough," or the feeling  I had to choose. The book made me realize I wasn’t the only one who felt this terrible loneliness, and brought me a sense of connection I longed for. McBride alternates between descriptions of his early life and first-person accounts of his mother Ruth's life. I admired Ruth (aka Ma or Mommy) who narrates the story of her hardships with fierceness and a sense of humor—from her abusive father to choosing to marrying a Black man in 1942 and raising her children, sometimes on her own. The Color of Water has not only taught me to embrace my cultural/racial identity, but also to have a strong sense of (my individual) self and the world.

Ordinary Light, by Tracy K. Smith (22nd Poet Laureate of the United States), is a coming-of-age story that explores her life, especially the bond between the author and her mother. The most compelling part of the book focuses on her mother’s illness and the slow-dawning awareness that death is inevitable. —Marialuisa Monda, Events Assistant 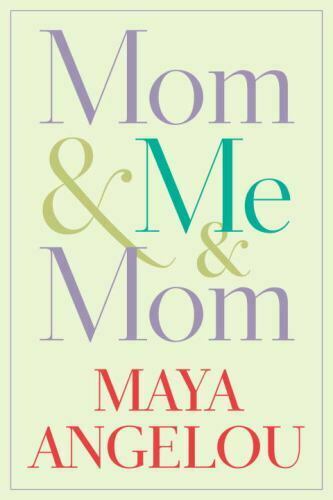 In Mom & Me & Mom, Ms. Angelou tells the story of her relationship with her mother with much love.  It is especially amazing considering the numerous conflicts and heavy moments that transpired during much of their time together.  Somehow, their focus (particularly Maya’s, I would argue) keeps returning to a positive kindness, and the peace that Ms. Angelou resonates also brings comfort to the reader throughout the book.  Angelou strives to see the potential beauty in all her encounters with her mom – from separation, to uncomfortable reunion, to reconciliation. What becomes increasingly clear throughout this honest chronicle is the unconditional love shared by mother and daughter. —Joe Russo, Systems Assistant

J.R. Ackerley | My Father and Myself (ebook also available)

Published posthumously in 1968, My Father and Myself chronicles J.R. Ackerley’s quest to discover the truth about his deceased father, an elusive man who led a secret life for decades.  As he explores his father’s secrets, Ackerley reflects on his own life as a gay man from youth to old age.  One could say that My 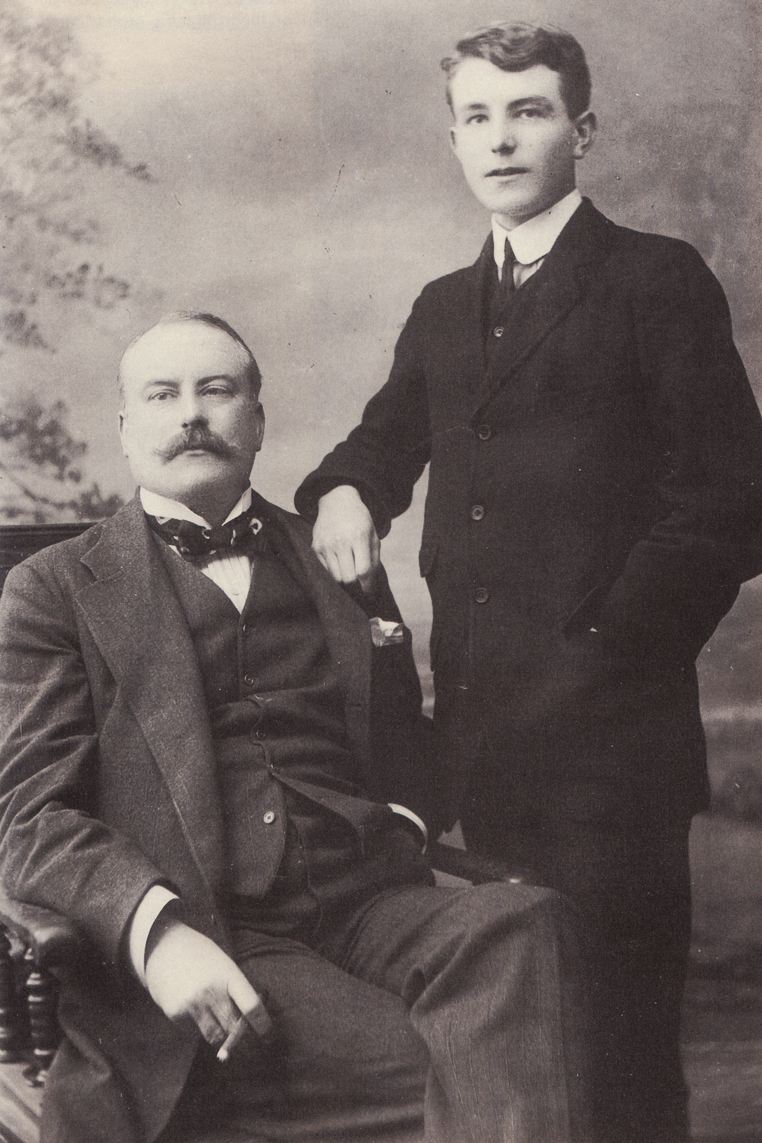 Father and Myself is as much about the author as it is about his father, but his exploration of self doesn’t fall into the narcissistic trappings of many memoirs. Ackerley’s account is honest, witty, sad, and the writing is lovely and clear-eyed. "Detached" doesn't quite describe his approach, but it comes close. His view of his father—despite their complicated, fraught relationship and the secrets they withheld—is generous and seeks an understanding of the man, not easy judgment. Ackerley (1896-1967) was the literary editor of "The Listener," the BBC’s weekly magazine, for decades where he published many soon-to-be influential poets and writers. He clearly learned valuable lessons from his “day job,” as his writing is a model of storytelling at its best and his narration, which disregards a straight chronology, keeps the book moving at a clip that makes it difficult to put down.  Taking a very different approach, Edward Dahlberg’s Because I Was Flesh (1964) is a tumultuous, tense biography of his mother, a widowed “Lady Barber” in rough early 20th-century Kansas City. Dahlberg delivers the goods in difficult, dense, allusive prose, an uncategorizable portrait of fraught familial failure and disappointment in the "old, weird America." —Steven McGuirl, Head of Acquisitions 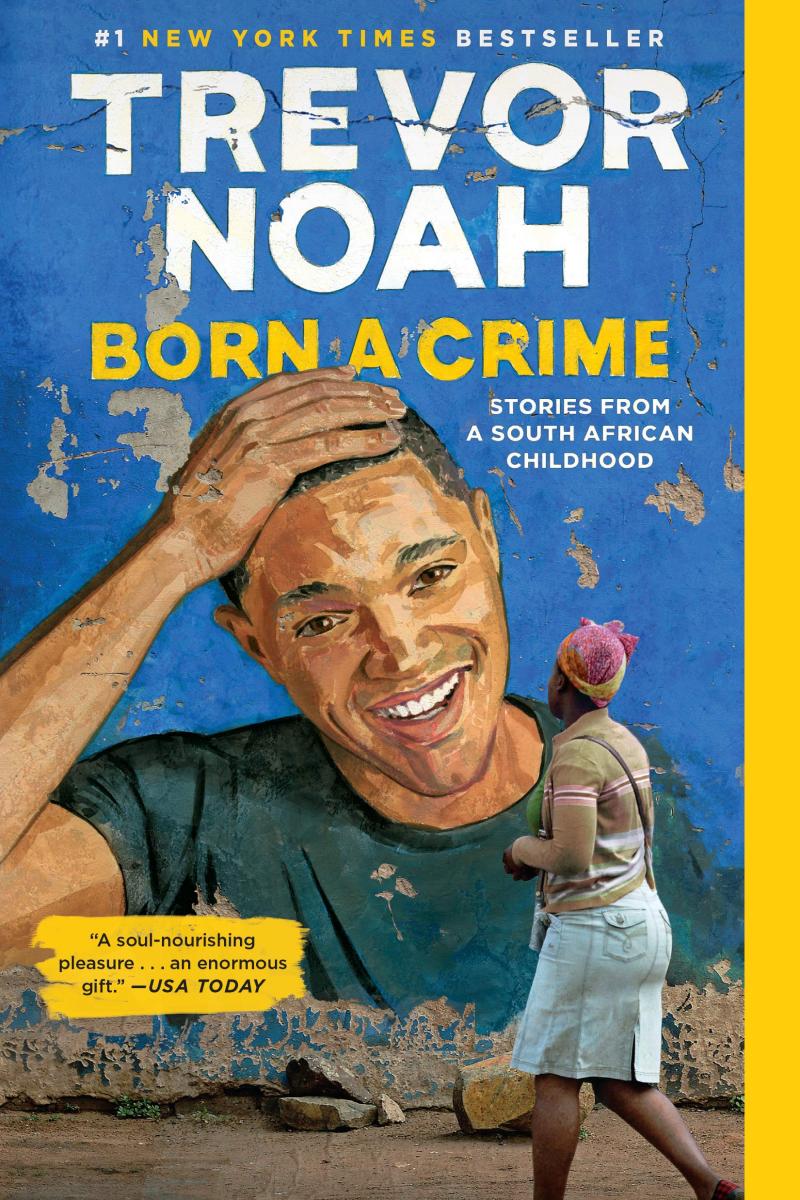 These two memoirs have crossover YA/adult appeal. In Trevor Noah's adult memoir released in 2016, he recounts his childhood growing up in South Africa. The product of a Black mother and white father, Noah's mere existence is 'a crime' and he spends much of his early youth hiding from authorities until apartheid is overturned. His hilarious tales that revolve around his mixed relations often highlight his mother and her extended family. You can find a cleaner version of his mirthful memoir as an e-book in our Cloud Library.

An author-illustrator of picture books and graphic novels, Jarrett Krosoczka made an impromptu TED talk in 2014. The experience led him to create this graphic memoir that delves into growing up with a heroin-addicted mother and ultimately being raised by his stern but loving grandparents. His interest in art from a young age was his lifeline through his tumultuous childhood. You can find the original book in our Young Adult-High School collection. We also have the e-audio version in the Cloud Library; with a full cast, the latter is an enriching, not to mention award-winning, audio experience evocative of a radio play from the past. –Susan Vincent Molinaro, Children’s and Young Adult Librarian

George Takei | They Called Us Enemy 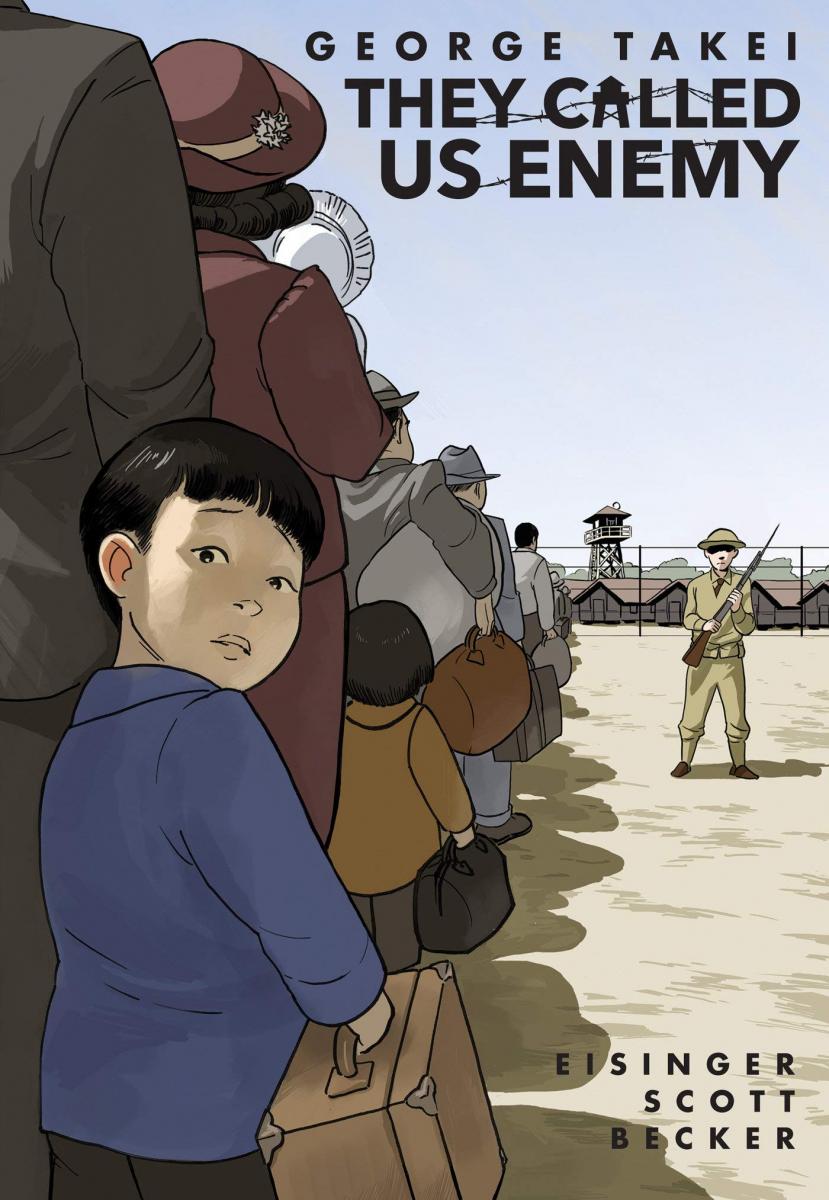 This is a remarkable graphic memoir depicting the famous actor and activist's childhood within American concentration camps during World War II. Readers will see how Takei and his family (alongside other people of Japanese descent) were haunted by fear and shame due to who they are. This is a haunting read but a necessary one, as it not only describes the horrors of legalized racism but also shows the love of family through the hard choices made by the author’s mother and his father's faith in justice and equality.  They Called Us Enemy should be required reading for history classes in every school across the country. –Marialuisa Monda, Events Assistant