If you are looking for the perfect gift for the readers on your list this holiday season, Library staff have suggestions for book lovers of all ages and varied reading interests.  More staff book recommendations—including westerns, books on World War II, biographies, music, and more—can be found here.

Happy Holidays from the staff at The New York Society Library. 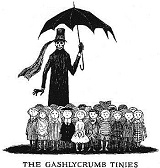 Edward Gorey’s Amphigorey is always an appropriate gift for any person at any time. If you give it to someone and they don’t like it, it’s time to reevaluate the relationship. Better yet, find a reason to visit his or her house, steal it back, and give it to someone who will appreciate it.  This collection includes 15 classics by the beloved, departed Mr. Gorey. The Gashly-Crumb Tinies is always a favorite. Any holiday party would be enlivened by a dramatic reading of the rollicking tale, in which doomed children are dispatched mercilessly and alphabetically. My personal favorite is The Unstrung Harp, an ingenious exploration of the ”unspeakable horror of the literary life.”  It never gets old. —Christina Amato, Conservator

When one thinks about a mime, one usually pictures a man in a striped shirt trapped in an invisible box.  But there is more to miming, isn’t there? A Twenty Minute Silence Followed by Applause by Shawn Wen is a slim volume of creative non-fiction aimed at answering this question. Wen’s prose explores the life of Marcel Marceau, one of the greatest mimes of the 20th century. In doing so, she unfolds the complex beauty of mime as a performance art while attempting to get at the heart of Marceau himself. This multifaceted book satisfies a variety of interests and would make a perfect stocking stuffer for anyone inspired by the arts, performance, biography, or exceptionally well-written prose. —Ashley-Luisa Santangelo, Bibliographic Assistant
For years, I’ve been giving copies of Wining and Dining with Rhyme and Reason by D.T. Carlisle and Elizabeth Dunn to my wine-loving friends, and I discovered it right here in The New York

Society Library stacks.  An amusing and informative 1933 guide to wine in verse, it features delightful drawings by Carlisle — perambulating bottles of red Bordeaux, swashbuckling Rhones, and armies of white Burgundy and Bordeaux heading into a connoisseur’s battle. There aren’t many copies of this book available in the secondary market (check Abebooks.com), but they can be found. I keep hoping some enterprising press will reissue it. —Carolyn Waters, Head Librarian
Who are you? You sure about that? You won’t be once you pick up The Book: On the Taboo Against Knowing Who You Are from wisdom-explainer Alan Watts. Essentially a primer on the Hindu philosophy school of Vedanta, the simple, gripping text rings of the seeker Sixties yet skirts any dated feel or sectarianism. This slim volume is my favorite gift for a high school or college grad, or for anyone who needs their mind blown. —Sara Holliday, Head of Events 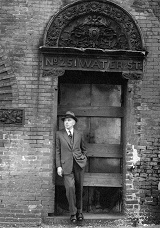 I have given away several copies of John Williams’s 1965 novel Stoner after first reading it about a dozen years ago. No novel has universal appeal, but Williams’ beautifully written youth-to-grave chronicle of an English professor comes close. If someone on your list likes novels—almost any kind of novels, really—consider giving them this NYSL favorite and recent publishing phenomenon. (Audiobook and ebook editions also available at NYSL). Another (almost) sure-thing is Up in the Old Hotel by Joseph Mitchell (left), a collection of sharply-written profiles of New York city saloons, eccentrics, forgotten rituals, neighborhoods, and more originally published in The New Yorker from the 1930s though the 1960s. (Audiobook and ebook editions of this are avaialable at NYSL, as well.) And speaking of New York, Luc Sante’s Low Life, an exhaustive but compulsively readable account of vice, crime and corruption in turn-of-the-century New York, is the perfect gift for history and true crime buffs. For fans of American popular culture, I can’t recommend Kliph Nesteroff’s The Comedians enough. A definitive book on the history of American comedy, it is obsessively researched and very, very funny (and occasionally frightening). —Steven McGuirl, Head of Acquisitions
The Adrian Mole series by Sue Townsend follows a precocious teenager growing up in working-class England during the Thatcher administration. The Adrian Mole Diaries is a compilation of the series’ first two books: The Secret Diary of Adrian Mole, Aged 13¾ and The Growing Pains of Adrian Mole. Young Adrian fancies himself a misunderstood genius, sending his poems to the BBC (and dismissing the Beeb’s rejection letters) and obsessing over a much wealthier classmate. Amid the usual teenage concerns about acne, sex, and grades, he experiences the consequences of Thatcher’s policies as Adrian’s parents struggle with an uncertain future. Any Anglophile on your gift list will enjoy Townsend’s dry humor and pathos, including Doctor Who fans, British royal family watchers, global political buffs, and self-sorted members of Ravenclaw. It’s also a perfect book for a bright yet infuriating younger relative—the one who’s madly in love with Harry Styles, insists Slytherins aren’t that bad, or reminds you that Kate Middleton is technically a duchess, not a princess. —Kate Marcus, Circulation Page

(For more gift ideas, see the Children's Library's recent post, Give the Gift of Reading.) 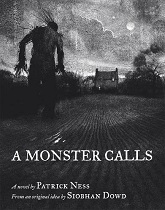 In A Monster Calls by Patrick Ness, thirteen year old Conor wakes up at seven minutes past midnight to a giant monster in the form of a yew tree standing outside his bedroom window.  He has been expecting a monster and isn't scared, but this is not the one appearing in his reoccurring nightmares. This monster is wild, ancient, and requesting the one terrible thing that Conor is unable to give, the truth. This beautifully illustrated chapter book is darkly funny and deeply moving, an excellent choice for middle school students. —Morgan Boyle, Assistant Children's & Young Adult Librarian
Have a YA reader on your list? Consider giving them My True Love Gave To Me (Stephanie Perkins, ed.), a collection of short stories centered around the holidays. It’s a gathering of big names in the YA realm (Holly Black, David Levithan, Rainbow Rowell, to name a few) mixed with some up-and-comers. Readers will enjoy these hopeful romantic tales, even when the mistletoe magic doesn’t work as desired. As the holidays can be a busy time, it’s nice to dip into a sweet story, perhaps even one a day over a winter break. And short stories are great for introducing readers to new writers; perhaps your recipient will discover a new author they love. Want to give more? There’s a companion volume, Summer Days and Summer Nights, that includes a story by editor Stephanie Perkins that links to her contribution in the wintry set. Among these 24 tales, there’s bound to be something to keep eager YA readers reading throughout the year.  —Susan Vincent Molinaro, Children's and Young Adult Librarian
Heal a heart with Frances Hodgson Burnett’s beautifully written classic, The Secret Garden. Singular, lovable characters work through bereavement, illness, and depression by way of roses, surprise friendships, and a sprinkling of universal spirituality. Will leave almost anyone with the urge to garden or bake. —Sara Holliday, Head of Events
If you know anyone with a baby or toddler you must give them the gift of a copy of Ten Little Fingers and Ten Little Toes by Mem Fox. It is a superbly simple, rhythmic, and rhyming story filled with delightfully diverse illustrations of adorable babies, including their chubby fingers and toes. —Randi Levy, Head of the Children’s Library