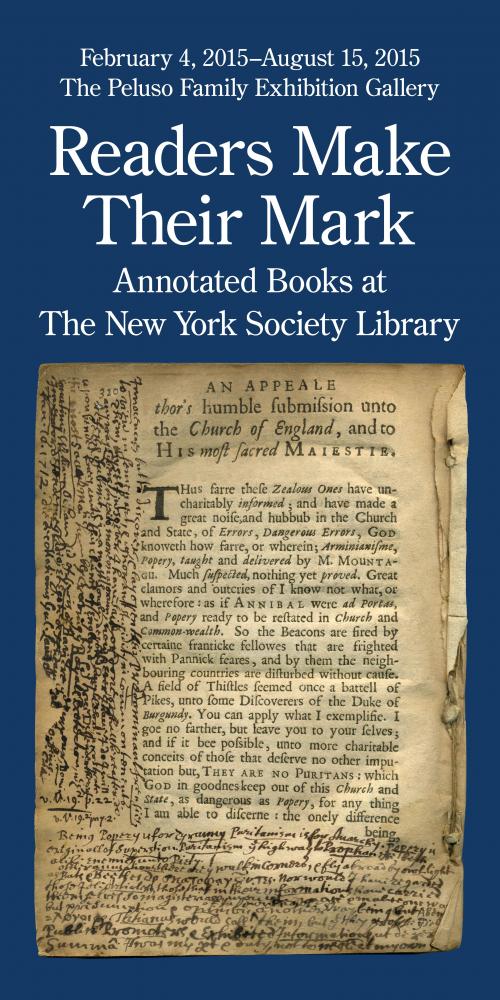 This exhibition took place February 5 - August 15, 2015. Our next exhibition, Sarah Parker Goodhue: A Hidden Collection Comes to Light, opens October 6, 2015. Read on for a wealth of information about annotated books.

Readers Make Their Mark explored the practice of reading through the many handwritten notes left in the margins of books from the New York Society Library’s Special Collections. As modern-day readers of annotated books, we peer over the shoulders of readers past and watch them work to comprehend, analyze, or even correct printed texts. The Library’s Special Collections contain a rich variety of marked-up books, their blank pages and margins are rife with notes from readers known and unknown over five centuries. Highlights include two books annotated by one of Queen Elizabeth’s advisers, the 16th-century alchemist John Dee; an unidentified contemporary reader’s responses to the first American edition of Emma in one of three known copies worldwide; and George Bernard Shaw’s handwritten corrections to a proof copy of his surreal comedy Too True to Be Good. 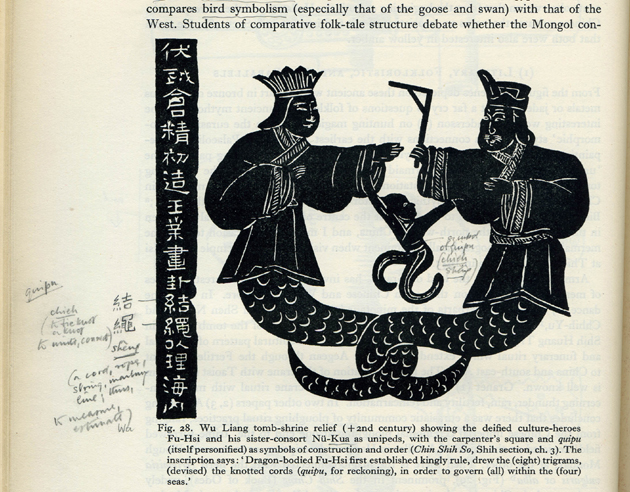 Many annotators on exhibit are unknown or obscure, but their engagement with a text tells just as much as the notes penned by more famous readers. When we read annotations, voices speak from the margins that would otherwise be silent. Sometimes we meet readers and collectors who wrote so extensively in their books that they transformed them into everything from records of their thinking to autobiographical albums. Annotators from the Library’s Winthrop and Sharaff-Sze Collections are a special focus of this exhibition, providing case studies of three individuals’ reading tastes and habits. Inky trails left in books read by Adam Winthrop (1548-1623) and then by his grandson John Winthrop Jr. (1606-1676) show how tastes in religious, political, and esoteric literature (and modes of reading) passed from one generation to another. In Mai-mai Sze’s (1909-1992) books, heavy annotations reflect her devoted study of similar topics in the eastern tradition, in addition to keen interests in translation and poetry.

This exhibition was among the first of its kind to focus explicitly on annotated books. As evidenced by recent pieces in the New York Times and the New Yorker, interest in annotations has grown substantially in recent years. Digital projects to track readers’ responses to texts, such as Annotated Books Online, Book Traces, and The Archaeology of Reading in Early Modern Europe, have all drawn attention to the ways that annotations assist scholars in their efforts to better understand the reading practices of the past.

As part of the exhibition season, blog posts were contributed by co-curators Frederic Clark, Madeline McMahon, and Erin Schreiner.  Erin Schreiner is the Library's Special Collections Librarian; Frederic Clark is a two-year visiting assistant professor at the Institute for the Study of the Ancient World at New York University; Madeline McMahon is a graduate student in History at Princeton University.

By Erin Schreiner:
Mark Up Your Books (But Please Don't Mark Ours)
Readers Make Their Mark on You
Breadcrumbs in the Library
Personal Reasons: On Mai-Mai Sze's Motivations for Reading and Annotating

Anthony T. Grafton reviewed the exhibition for the New York Review of Books and presented a lecture, Books & Barrels: Readers and Reading in Colonial America. The lecture can be streamed here.

For a complete bibliography of books exhibited, please click here.

About the Peluso Family Exhibition Gallery