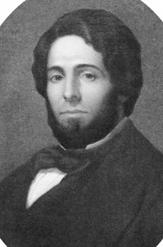 Described by the New Criterion as “a small but remarkable exhibition,” Melville’s New York explored the author’s time in New York City between 1849 and 1850, when he was a member of the Society Library. Following Andrew Delbanco’s analysis of Melville as a New Yorker and the connection between his work and the city, Herman Melville’s New York looked at Melville’s urban life as a writer and an author. The people he knew and the places he went are highlighted on period maps to illustrate the urban geography that Melville lived in. Alongside the Library’s own copies of Melville’s works, the display drew on our circulation records to show how Melville was received as an author by his peers at the Library in the years surrounding the publication of his magnum opus, Moby-Dick.

Special Collections Librarian and curator Erin Schreiner introduces Melville's Library use and readers in this series of articles:

Charles Cuykendall Carter adds more detail in this review for the Journal of the History of Ideas.

Click on any image to see a larger version. 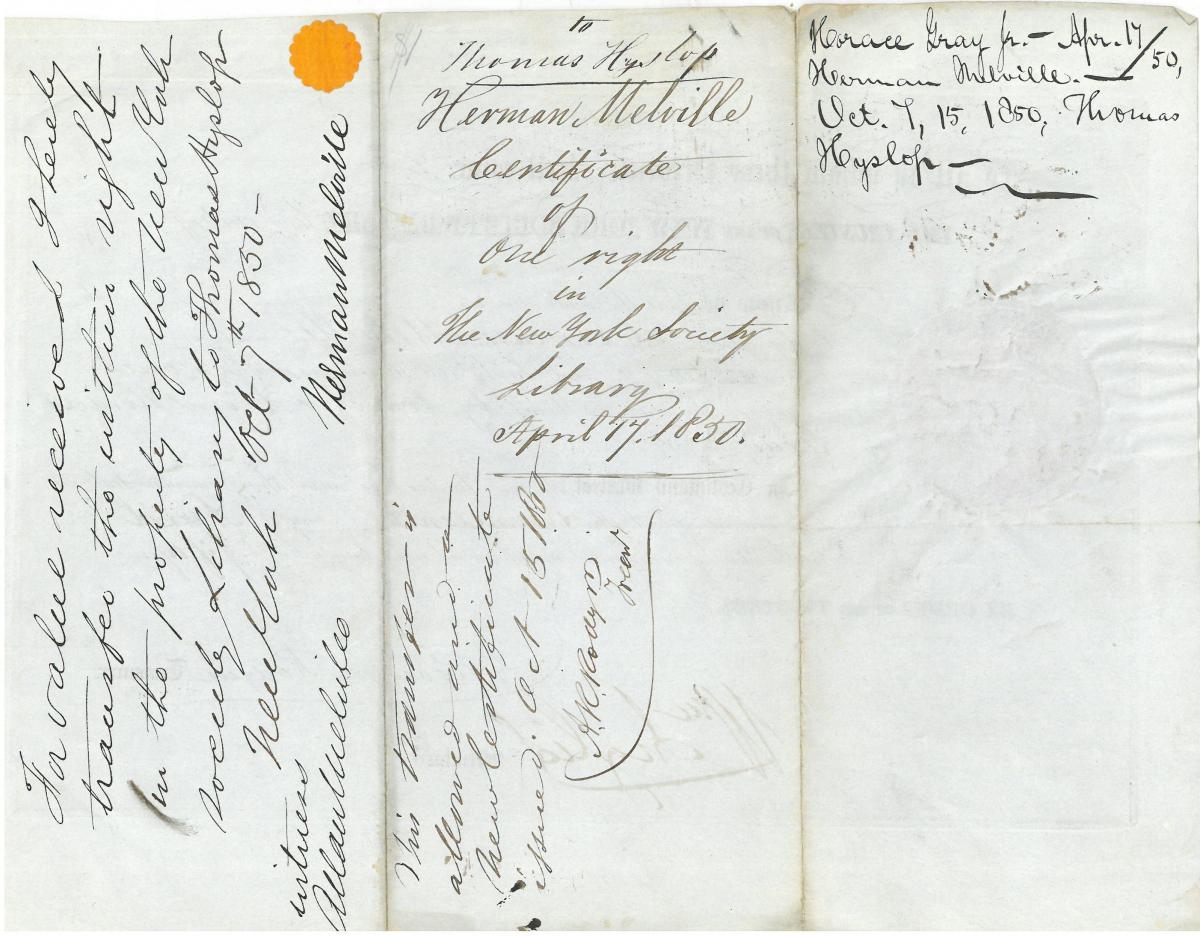 The New York Society Library
Share in the Library, purchased by Herman Melville from Horace Gray Jr., 1850 (verso)
(From the New York Society Library Institutional Archive)
Herman Melville (1819-1891) was an on-again-off-again member of the Society Library thoughout his adult life. After a brief membership in 1848, Melville bought a new share from Horace Gray Jr. in April 1850. His brother, Allan, bought a share form Maurice Leyne at the same time, and both Melvilles re-sold their shares that autumn when they moved from New York to Pittsfield, Massachusetts. Herman Melville would also use the Library near the end of his life after inheriting a share from an in-law. 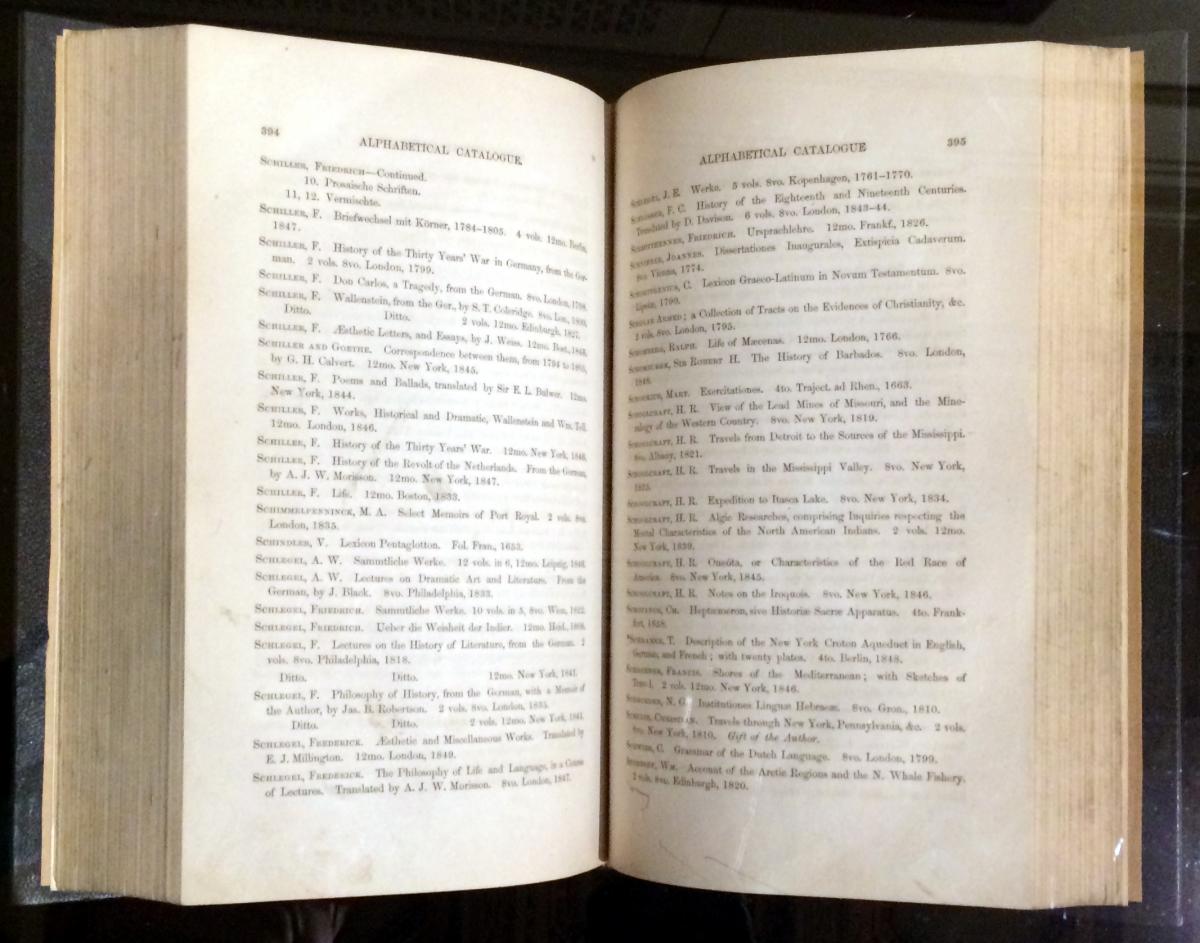 The New York Society Library
Alphabetical and Analytical Catalogue of the New York Society Library: With the Charter, by-Laws, &c., of the Institution. (New York: R. Craighead, Printer, 1850)
Moby-Dick’s story begins, famously, “Call me Ishmael,” but the book itself starts with an etymological notice on the word whale and “EXTRACTS (SUPPLIED BY A SUB-SUB-LIBRARIAN).” Melville introduces himself there as the “mere painstaking burrower and grub-worm of a poor devil of a Sub-Sub,” and this 1850 catalog lists nearly all the sources he gathered.

The New York Society Library
Circulation Ledger, 1847-1850.
(From the New York Society Library Institutional Archive)
While he did not borrow many books, Melville visited the Library regularly. In December 1850, his wife Elizabeth described their daily routine in a letter to her stepmother, Hope Savage Shaw: “After dinner is over, Herman and I come to our room, and enjoy a cosy chat for an hour or so....Then he goes down town for a walk, and looks at the papers in the reading room....” Photo by Karen Smul 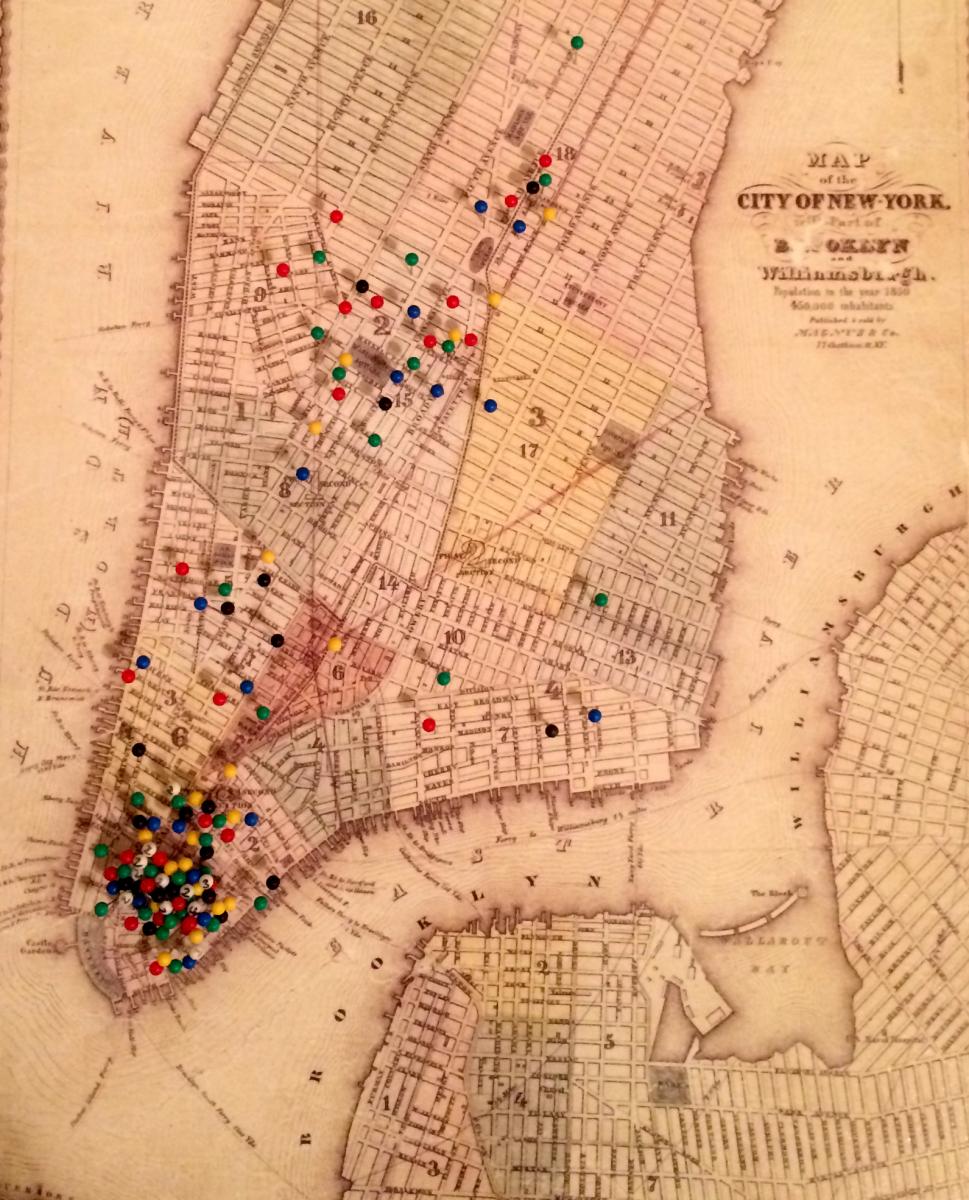 Map of the City of New-York with part of Brooklyn and Williamsburgh: population in the year 1850: 450,000 inhabitants.
(New York: Charles Magnus & Co., 1850. Reproduction freely obtained through New York Public Library Digital Collections.)
The pins in this map show the workplaces or homes of Library members who checked out Melville’s books. Melville’s early readers lived and worked in the same places he did, around Wall Street and the waterfront, and near Washington and Union Squares. The Library was on Broadway at Leonard Street, which points toward the S in Hudson.

William Scoresby (1789-1857)
An Account of the Arctic Regions with a History and Description of the Northern Whale-Fishery.
(Edinburgh: Printed for Archibald Constable & Co.; London: Hurst, Robinson and Co., 1820)
This was one of two books that Melville borrowed in April of 1850, six months before he moved to Pittsfield, Massachusetts. He kept this book and Scoresby’s Journal of a Voyage to the Northern Whale-Fishery out for over thirteen months, returning them in June 1851. Moby-Dick was published just four months later. Photo by Karen Smul

Making Connections: Melville and His Readers at the Society Library, 1847-1854
Multimedia installation created by Erin Schreiner
Between 1847 and 1854, 227 Society Library members borrowed one of Herman Melville’s seven novels. This installation represents this exchange between the Library and its membership, showing readers and the Melville titles they borrowed as recorded in two of the Library’s charging ledgers (1874-1850 and 1851-1853). What can we learn from this mess? Quite a lot about the popularity of Melville’s trael fiction. Typee, borrowed 87 times in eight years, and Omoo, borrowed 92 times in seven years, were especially popular with Library members, though White Jacket outshone them all, with 56 checkouts over four years. Moby-Dick, by contrast, was borrowed just 18 times in three years. These statistics bear out the favored anecdote of literary historians: Melville, a popular writer, lost much of his audience when he published the novel that would cement his posthumous reputation.

About the Peluso Family Exhibition Gallery