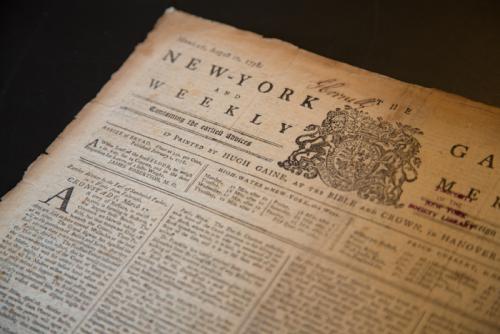 The New York Society Library has been collecting ephemeral materials such as newspapers, pamphlets, and broadsides since the late 18th century. In 1791, the Library placed an ad in the Daily Advertiser asking members to deposit "pamphlets and other publications that in any manner relate to the history or politics of this country, before or since the revolution." The tradition has continued through the 20th century, and the Library now holds an impressive collection that was built as the events these materials documented took place.

The Library has subscribed to local newspapers throughout its history, and a particular strength of our collection is the wide coverage of New York City's early newspapers. Among the highlights are copies of William Bradford's New York Gazette, the city's first weekly newspaper; John Peter Zenger's New York Weekly Journal, famous for the role it played in establishing freedom of the press; and newspapers printed by then-members Hugh Gaine (The New-York Mercury and The Plebian) and James Rivington (Rivington's New York Gazetteer). The Library also has substantial holdings of 19th-century city newspapers and other periodicals, including The New York Picayune and The New Yorker.

Researchers can find the Library's holdings of 18th- and 19th-century newspapers by searching New York (N.Y.) -- Newspapers in our online catalog. A copy of Frank B. Bigelow's "Early files of newspapers in the New York Society Library" (The Literary Collector, v. 2, Dec. 1902) is also available online via Google Books, and appears here in list form.

In the 18th-century, pamphlets and broadsides served as a public outlet for political discourse much in the same way as television or the Internet do today. Leaflets were printed, handed out, exchanged between friends, and usually discarded shortly thereafter.